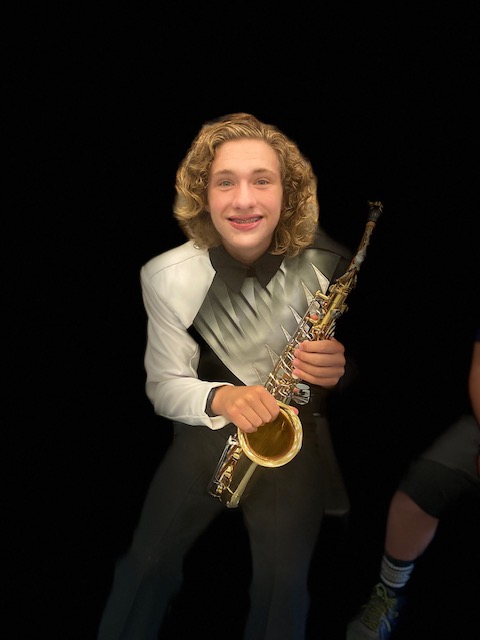 He stood there on the field with the rest of the band at the football game against Ellison where they performed their competition piece “Juliet Letters” before the game. A big grin came across his face as the crowd clapped and cheered as they exited.

Freshman Lucas Eppele was born with cerebral palsy and diagnosed at age one. Cerebral palsy is a neurological brain development disorder that occurs before birth or during birth and can affect a person’s muscle coordination. For Eppele’s case, it affected how much he can stand still and his ability to walk

“It’s hard for me to not move around every time after I finish a performance, and balance is a challenge and can also be difficult,” Eppele said.

Eleven years ago, when Eppele was only four, he had his first ever surgery on his spine to help his legs progress to the way they are today. One year after his first surgery, he was able to take his first independent step.

“I’ve had two more surgeries after that on my legs,” Eppele said. “They put a cast on my legs, but not because of a broken bone, and luckily I didn’t need crutches.”

Outside of school, Eppele takes karate lessons to help his balance.

“My favorite part of karate is learning new forms, performing drills, and chopping and slicing with the sticks,” Eppele said. “I’m currently a brown belt with goals of achieving my black belt, and I’m very close.”

One of the things Eppele has always been passionate about is music. He started playing piano seven years ago, and he wanted to continue to pursue his love for music when he started middle school at Four Points Middle School, so he started learning how to play the saxophone and joined the band.

“We put him into music lessons when we discovered that Lucas has perfect pitch, which is the ability to recognize any key or musical chord,” his mother, Jamie Eppele, said. “So, when we put him in music lessons, we started with piano, and it was perfect, because you can sit down and play. We’ve had the exact same teacher for the last seven years who just blossomed with him.”

After a successful three years of middle school, it was time for Eppele to transfer over to high school. Eppele said that he was nervous, but after visiting the high school, he was then excited to be a freshman and become a Viper.

“High school is awesome, and I love being at a big school,” Eppele said. “And, I really like all of my teachers.”

When Eppele first started high school, he knew he wanted to take along his passion of music and continue playing the saxophone, which is why he decided to join the high school marching band and their company.

“My section, the saxophone section, has been so great to me,” Eppele said. “They’ve been friends to me, they help me carry my instrument, as well as help me understand marching band, because high school marching band is a little different.”

“Lucas has brought a lot to our saxophone section this year,” Parmelee said. “He always is positive and enthusiastic toward the band and every single performance and rehearsal, which for most people is hard to do.”

“I felt like it was going to be challenging now that he has to walk and play his instrument, and I was very nervous about it,” Jamie said. “You know, ‘What would happen if you fall?’ or, ‘What would happen if we couldn’t keep up?’, but he’s done it successfully, and we realize it’s okay if we fall; we just get right back up.”

The first time Eppele performed on the field with the band was the pre-game performance at the Cedar Park game.

“I got to walk around and play music, and it was super exciting to be playing on the field in front of thousands of people,” Eppele said.

Jamie said that when she first saw Eppele out on the field, marching and playing his instrument with the band, she got tears in her eyes.

“It was very emotional and gave us goosebumps,” Jamie said. “I don’t know if I’ve ever been prouder because it’s a lot of work, and he went through that summer boot camp like a champ.”

Jamie said that, as a mother, she loves that her son gets to participate in a band and be a part of the company, while overcoming challenges with his disability.

“It’s so welcoming, and so many friends see Lucas for his talents and his shining personality,” Jamie said. “They see far beyond [his disability], and I don’t even know if people realize it’s cerebral palsy. They just look at Lucas because he’s friendly and really enjoyable to be around.”

Parmelee said that what he notices most from Eppele besides his enthusiastic and positive attitude is how encouraging he is towards his section and the rest of the band.

“He is always reminding us about the why of what we do and reminds us all to always put our best self forward,” Parmelee said.

“I think that people should be able to participate in anything they want to participate in,” Eppele said. “Some things can be hard like the actual marching part in band, but people help me, and I don’t let cerebral palsy stop me from doing anything.” 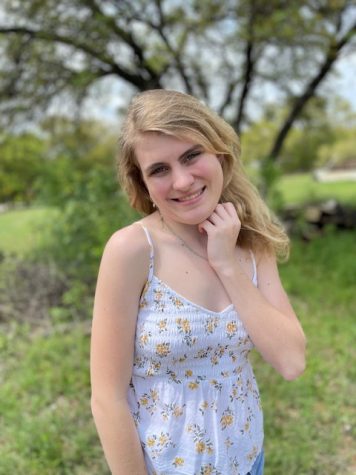 Taylor Chronert is a senior and this is her second year with the newspaper staff. She is involved in Cross Country and Track and has been competing for...