One Teacher Makes All The Difference

Math teacher Mike Meadows came out of his classroom Monday expecting to speak with head athletic director Drew Sanders about some of his athletes. Little did Meadows know, he would be greeted in the hall by a cheering Vandegrift football team there to give him the “Change Our School” award.

The football leadership council and coaches give the award to a chosen teacher who exemplifies great qualities and truly makes the school a better place.

“This surprise totally threw me off,” Meadows said. “There are four or five moments are like this, that stand out. Every once in a while, something comes along that is unexpected and I think that’s what makes this so special.”

Where it all began

Sanders created the “Change Our School” award last year with the football program in order to recognize teachers and staff who deserved recognition for all they do for Vandegrift.

“We wanted to choose someone who challenges kids, works hard and at the same time connects with the kids,” Sanders said. “He’s a shining example of the great things that happen in out school.”

The team presented Meadows with a plaque, a bag of candy corn, a gift certificate to Olive Garden and a pair of Jordan sneakers.

“We don’t do anything super outlandish for the award, but we try to get them a nice little gift,” Sanders said.” Mainly just to recognizing the teacher and tell them we appreciate them.”

Why one teacher can be “Second to None”

There were three or four teachers that were in the running for the award. While deciding the winner, the boys on the leadership council were persistent in talking about how Meadows always made time for his students. Two of the varsity captains, seniors Drew Nelson and Davis Beal, spoke and presented Meadows with the award.

“That really stands out from another teachers, and I really appreciate it,” Nelson said. “I had Mr. Meadows my sophomore year for Algebra 2. What stood out to me about Mr. Meadows that most teachers don’t do, is he does have that personal connection with each and every student which really helps me and others learn his material better.”

Meadows, who has been teaching at the school since 2011, has taught at other schools where there is not as much involvement from students, making teaching more difficult. But at Vandegrift, with such high standards, student involvement becomes the norm.

“The kids at Vandegrift exemplify the ‘Second to None’ motto so much here,” Meadows said. “There are so many kids that reach above and beyond just to set the standard for everyone else. Being a part of the community and everything we have here really means a lot.”

The “Second to None” tradition is modeled after our school’s namesake, Lieutenant Matthew R. Vandegrift, who, according to his parents, represented “loyalty, honor, bravery and determination.” Read about Lt. Vandegrift here. 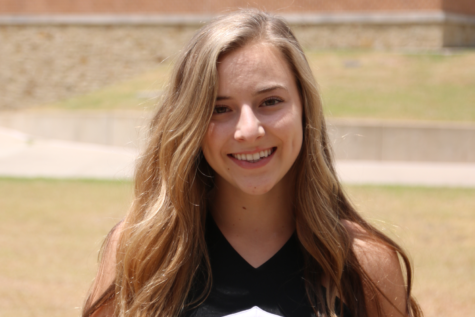 Sumerlyn Yudell, Social Media
Sumerlyn Yudell is a senior and this is her second year on staff. She is a member of the Varsity Cheer team and a PAL around campus. She loves to explore the city and try new restaurants. Her favorite season is fall, and she loves to hang out with her friends.
Leave a Comment