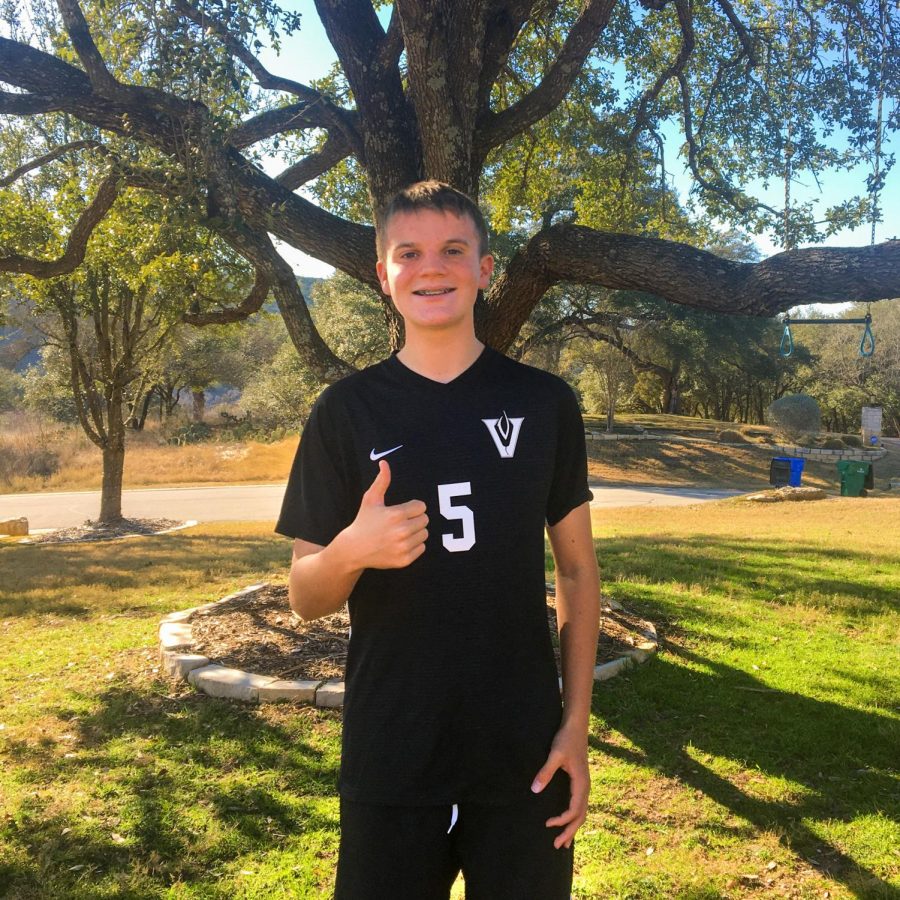 Freshman and JV A captain Rory Jacops gives a thumbs up while sporting his soccer uniform.

Breathing hard through the mask across his face, freshman and team captain Rory Jacops passes the soccer ball to a teammate during a JV A practice drill he’s leading. Jacops said that wearing a mask during practice is one of the downsides of the COVID-19 sports guidelines that have caused the team’s season to change.

“We have to keep our masks on and we have to social distance so it’s obviously different for socializing and making new friends on the soccer team, but you’re still able too, even with COVID,” Jacops said.

Due to COVID-19’s severe impact, Jacops recalls being worried about not having a soccer season at all. He knew several people who contracted the virus and because of how close it came to home, he knew getting to play again would be hard during this strange new era.

“Honestly at the beginning of the season, a lot of people got COVID-19, not on the team, just people I knew, and I honestly didn’t think we’d have a season,” Jacops said. “I’m glad we did, but it’s obviously different with COVID-19 and it’s great that we’re having a season for sure.”

Jacops message to his teammates is to be safe during this soccer season and not risk their health or their ability to play the game they love.

“I would say try to avoid as many obstacles as we can,” Jacops said. “Try to avoid getting COVID-19 for sure and work hard and win district and maybe make it to the playoffs.”

The young captain’s drive to work hard comes from a love for soccer he fostered as a kid. Though none of his siblings had ever played anything other than neighborhood sports, he loved soccer so much he decided he wanted to play competitively and now plays in the midfield during games.

“The backstory is, when I was little I played soccer at recess and I remember coming home and getting in my moms car and asking her if I could play,” Jacops said. “I decided I was just gonna play and work hard and try to be the best I can be.”

It turns out all of that hard work paid off, securing Jacops the position of captain, though not how he expected it during a year when everything has been altered so drastically. This means he’s in charge of leading warmups and stretches, making sure the team isn’t “goofing around,” making sure Coach Courtney is being respected, as well as respecting the new COVID-19 guidelines.

“I didn’t expect that I was going to be captain, I expected probably an older upperclassmen, but there aren’t as many upperclassmen on JV A, so it’s a great experience and I’ll definitely cherish the moment and the whole season for sure,” Jacops said. “It’s pretty cool, definitely different.”

Jacops also reflected on what he’s learned during the past year dealing with the pandemic and balancing his love of soccer and wanting to fully experience his high school years with the need to stay safe.

“It’s always fun as a freshman on the soccer team and one lesson that I definitely learned through COVID-19 and quarantining was to cherish my time and my moments because high school will be over sooner than it seems,” Jacops said.

Despite the setbacks COVID-19 has caused in the sports world, Jacops and the JV A team have worked hard to make the most of their new situation and the guidelines that come with it.

“We still have a lot of fun at practice and we do our best every single day at the games, obviously following the COVID-19 guidelines, but it’s a little bit strange,” Jacops said. “I feel that our team has done a great job of making the best of the situation and we have had a great season so far.”