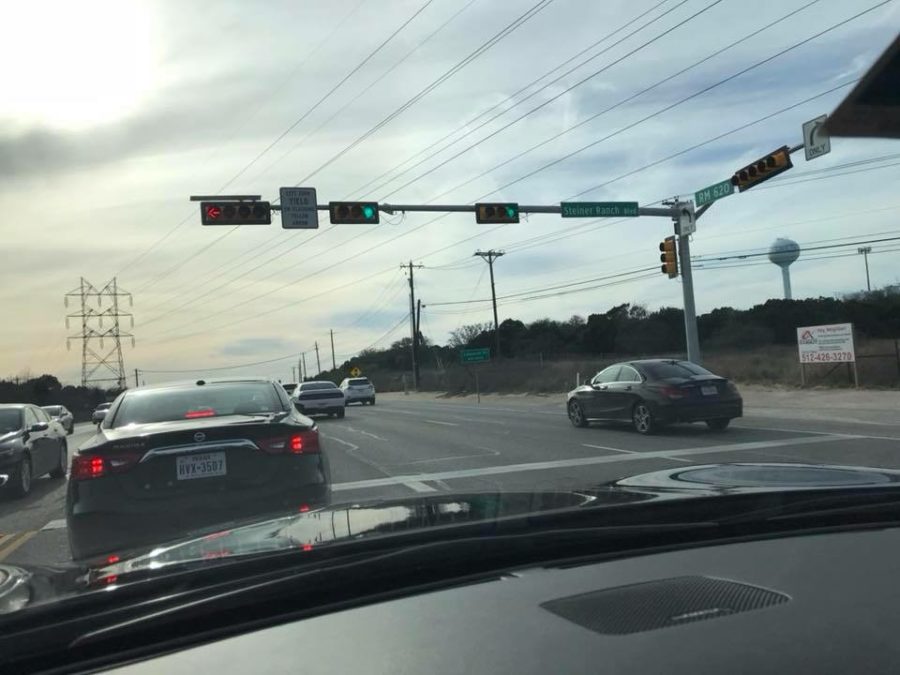 Drivers wait at the now working light. The new light was flashing yellow for a few weeks before it was fully functional the week of March 5. Ricardo Moschella photo

Why the new 620 traffic light is a problem

Because no one is used to this light yet, people will not be prepared to stop at the new intersection and this could very well cause a higher number of accidents than normal. It will also make traffic even more congested than before.

Residents of Lakeway and Steiner Ranch are accustomed to dealing with accidents. This light will cause even more accidents on 620 due to the short distance between the light at Comanche Trail and this new light at Steiner Ranch Boulevard. People won’t be prepared to stop so suddenly and they might be forced to slam on their brakes and cause a collision. The new intersection is also relatively small, with just enough room for one or two cars. Many people will try to go through the light before it turns red and this will likely cause cars to get rear-ended.

Those in favor of the new light might say that this light will make it easier for those taking Steiner Ranch Boulevard to get onto 620. While this is true, it will increase traffic for everyone who is already on 620, which is a much greater number than those on Steiner Ranch Boulevard. So having a light that helps a few while hindering many doesn’t really make sense. Commuters spend anywhere from 30 minutes to one hour getting to work or school in the mornings, and adding a new light will only increase that time.

The traffic light should not be a full functioning light, but instead just a yellow light. The light currently only blinks yellow, signalling drivers to drive with caution before approaching the light at Comanche Trail. This solution will keep drivers on 620 alert and ensure safe driving.