Vipers return to Monroe for round 2 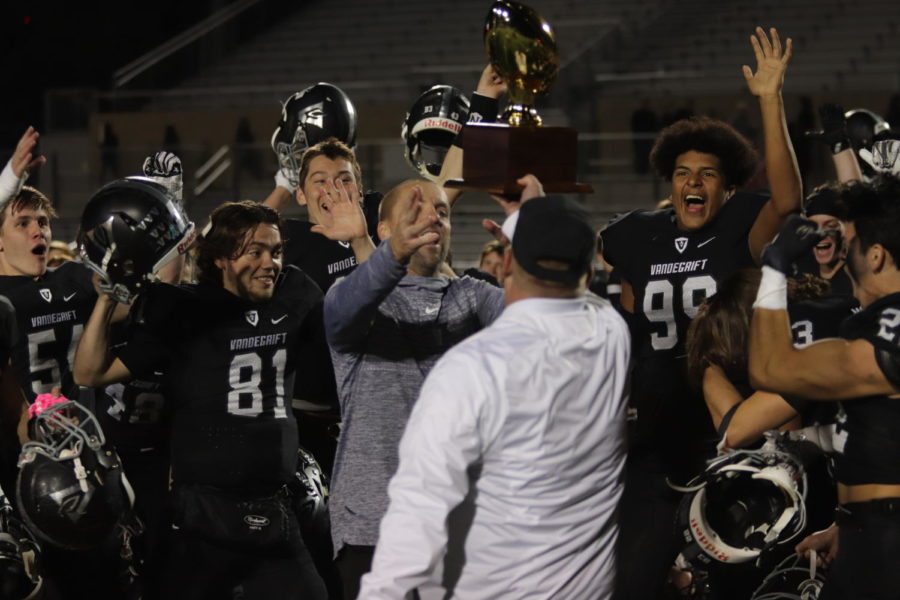 Every Friday night the community around Vandegrift High School gathers, whether at Monroe Stadium or at an away field, fans flood in. From younger siblings to great-grandparents, dressed in black and silver, all knowing what’s on the line. This is what they’ve been waiting for all season. These are the playoffs.

The Vandegrift Vipers will play Klein Collins tonight starting at 7 p.m. at Monroe Stadium. The Vipers faced Klein Collins during the second round of the playoffs last year, with an ending score of 21-28, Vipers winning after a double over time.

“They’re a tough opponent,” senior Brady Middleton said. “I think they’re ready for a rematch and we wouldn’t have it any other way, than on our home field.”

“Our performance on Friday was not a good representation of what we can do,” sophomore running back Ryan Sheppard said. “We played really badly that game and we should play a lot better on Friday.”

The Vipers have stayed on top of their game practicing every day and improving aspects in both the offense and defense. After a near loss, the Vipers have focused on offensive movement, though they say Klein Collins may not be expecting their passing game.

“I would say that our team is way more prepared than we were last week,” senior tight end Pearson Segina said. “We know how much this game means for the program and to all of us so we’re working a lot harder, coming off of this weekend, we’re having a lot more trust in everyone so we’re ready.”

The team said there’s one thing no one can beat them at: family. After spending countless hours together these boys aren’t just a team. Going undefeated this season the Vipers, led by Coach Drew Sanders, are suspected by many to have a good chance at the state championship.

“Our biggest strength is definitely how close we are as a team,” Segina said. “Vandegrift has always been known as the small school but how we are as a family and a team really puts us above other people.”

If one thing is for sure, the Vipers have proven they will not go down without a fight. They continue to show the bond they have is unbreakable. “The upperclassmen have been supporting us throughout the weeks and have helped me to work hard throughout the year,” Sheppard said. “Returning players have tried to help new players by bringing hard work, ethics, and just being nice.”