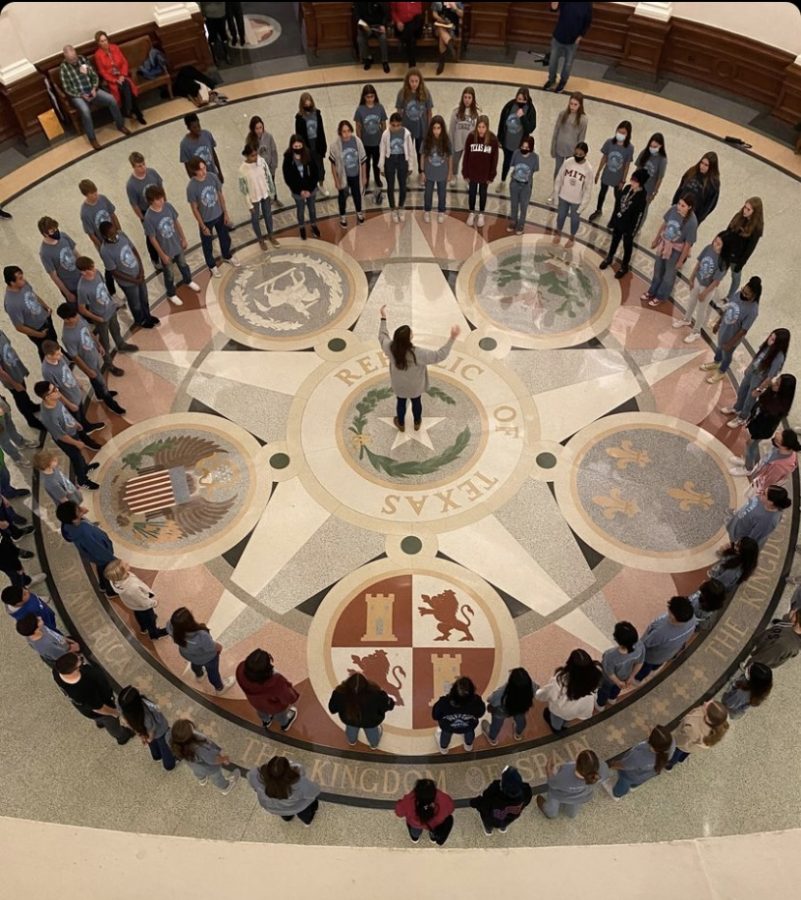 In unison, choir students channel all their practice and efforts into an excellent performance.

Non-varsity choir groups stand together in unison waiting to be conducted in at the Texas Capitol, where they’re surrounded by vast, pristine hallways, sweeping windows, and endless floors. Beginning with a low hum, rising to a stunning melody, and ending with a lasting echo, this creates a lulling effect on nearby listeners, inciting a memorable moment to viper students fairly new to high school choir.

Traveling together in two huge buses, non-varsity groups, including concert treble, acapella, and mens, were led by Mr. Zook, head choir director, and Mrs. Chandler, choir’s assistant director, to the Capitol Building. Each group performed on Nov. third in the early afternoon.

“The room was so cool because honestly, it made us sound ten times better,” freshman and acapella member Josephine Mendoza said.

Each group performed a song separately, beginning with acapella, followed by mens, then concert treble, concluding with all singing together “An Irish Blessing.”

The performance was different from their usual performance environment as they performed in front of Vista Ridge choir groups and teachers as well.

“It’s nerve racking singing in front of people you don’t know,” Mendoza said. “But, we all did really good overall.”

Caught up in nerves, laughter, and preparation, Mendoza and fellow freshman and concert-treble member Alissa Dovich, agree on a change they would make in hindsight.

“The singing was good, while we were singing,” Dovich said. “But, before and after, we were kind of unprofessional, I guess you could say.”

Preparing members to sing in a professional setting benefits them for future performances in the UIL competition they will partake in.

“They also said they wanted each of our individual choirs to come together and learn more about each other,” Dovich said.

Reflecting on the dynamic of the group, Mendoza and Dovich describe the choir as a family, working together to make important and fun things happen, both in public performances and private practices.

“Hearing other people sing in that room was amazing,” Mendoza said. “I felt like it was really cool to hear what different choirs are doing.”

But every song must come to an end, and when it’s over, there are memorable moments left for each group.

“Hearing the echo right when we ended our song was such a great moment,” Mendoza said. “It was so cool with the acoustics and I thought we sounded pretty good. [It was] the first time hearing how we all were together and at the end, we could hear the final ring. It was like a little echo.”