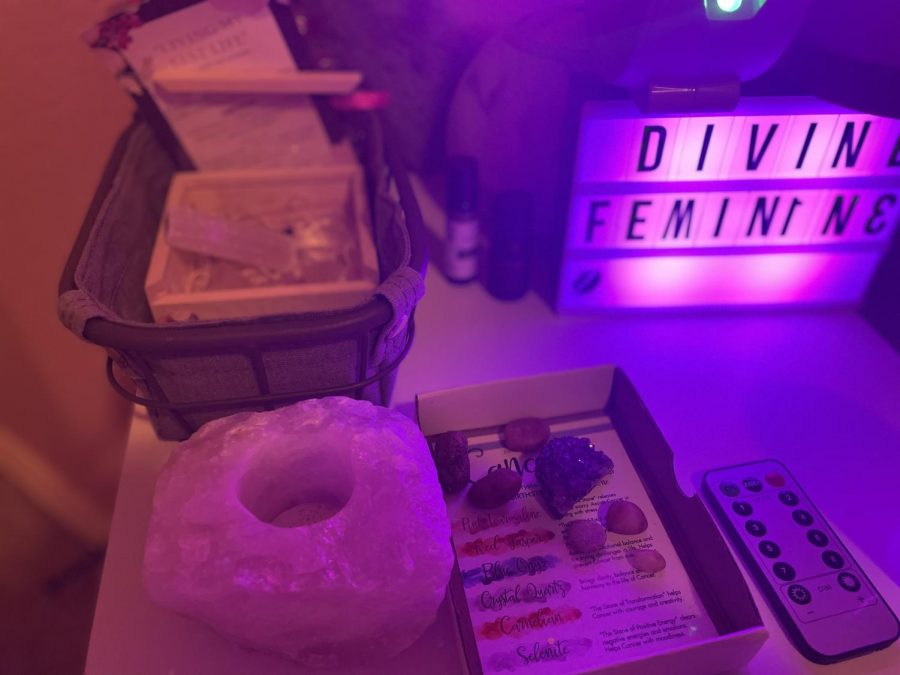 Junior Emerson Hartman keeps her crystal setup on her nightstand.

School spirit isn’t the only type of spirit floating around Vandegrift.

New and modern forms of witchcraft and spirituality have re-emerged thanks in part to social media. People across the world, including at Vandegrift, have begun to delve into practices like manifestation, crystal usage, astrology, affirmations and meditation. However, the reasons why students have looked into these practices and their experiences with it are different.

“I started looking into spirituality because when I first heard about it, I connected with it,” junior Emerson Hartman said. “I feel drawn to it.”

Hartman began working with crystals and manifestation a year ago. Since then, she’s seen growth in her mental and emotional health, and has become educated in determining the proper and ethically correct ways to practice spirituality.

“I feel like it’s brought a lot of positive energy into my life,” Hartman said. “I feel like now I have a precise [idea of] what I want in the future. I’m like, ‘I know what I’m going to do,’ and I’m going to work up to all of those moments.”

While Hartman has created a positive outlook for her life through manifestation, for senior Yoshita Dhawal, spirituality allowed her an opportunity to connect with her culture and family in India.

But mental health played a factor for her too. After the end of her freshman year, Dhawal was struggling and turned to meditation to help her.

“Part of it was my family because my dad–he didn’t push it or anything–but he was like, ‘Here’s what helped me if you feel open to it,’” Dhawal said. “I think at that point when you’re just sad and nothing’s really helping you’re just willing to try things. So I tried it and it just kind of helped me a lot to just be for a bit; to just kind of focus on your breathing, block things out and clear your head.”

A sophomore who wished to remain anonymous also said that mental health played a factor in turning to spiritual practices. But they delve more into what they call “witchcraft.”

“Witchcraft, contrary to popular belief, is not something that is ever considered evil,” they said. “While movies and media may try to portray it as devil worship, it is really anything but that. All it is is finding the extraordinary within the mundane, and using that energy to manifest something beautiful.”

“Even the smallest things like baking sigil cookies for protection can be a great experience,” they said. “But overall every little thing you do is setting you on a path and molding your future, although it will never be set in stone. Overall, all of that in itself is a great experience.”

Dhawal’s processes in regard to spiritual practices help protect her as well, however in a more mental way. She said she tries to set aside at least twenty minutes a week to meditate, and keeps an updated journal of affirmations and goals for the future.

“I just try and give myself time at least once a week to sit down and meditate,” Dhawal said. “Just putting [your goals] into the world, whether you believe in manifestation or not, is just good for your mind. I do that whenever I feel like I need it, like this month especially with college applications.”

Hartman also said that her process with using crystals and manifesting keeps her in a positive mindset. For example, she holds her selenite crystal when she feels the need to cleanse herself of any “negative energy contact” and always looks at her manifestation board before bed.

“The other day before I was going to bed, I brought my amethyst and held it in my hand,” Hartman said. “And at the end, I could actually feel the energy from the amethyst in my hand. I just felt very connected and grounded and very centered.”

While both Dhawal and Hartman said they started their respective journeys at relatively low points, they also said that turning to spirituality has provided them with some benefits.

“Sometimes if I’m really stressed, I’ll usually meditate with my crystals and tell myself it’s gonna be alright,” Hartman said. “I always take moments where I’ll hold my crystals, mainly my selenite, and I can feel an energy switch after I do that. I’m calm and very soothed.”

For Dhawal, those benefits came in the form of connecting with her roots.

“It’s definitely connected me to my roots a little more,” Dhawal said. “[My family and I] had something more to talk about, more to have in common, more to bond over. I think that just growing up here and not being where I’m from is a weird experience and I think that this kind of helped me feel more connected to that part of my identity.”

The sophomore, much like Hartman and Dhawal, saw uplifts in their mental health and their interactions with other students and friends.

“My mental health and overall wellbeing has improved in ways I couldn’t even imagine,” they said. “I’ve made friends at school and online that I never thought I would interact with. They have helped me in my practice, and I’ve tried my best to help them in theirs.”

However, because spirituality can be an important cultural practice, Dhawal emphasizes respecting the roots of these practices and trying to keep them in their most “pure” form.

Hartman agreed with this and said that, while spirituality is not a closed belief system, there are closed practices to specific cultural groups.

“Spirituality and that type of stuff is very freeform,” Hartman said. “There is stuff in paganism where they do smudging with white incense, which is a closed practice to Native Americans, so that’s like a big no, no. But working with astrology and crystals and stuff like that is open to anyone of any religion.”

While the sophomore also believes that honoring the root of practices is important, they emphasized Hartman’s belief that witchcraft and spirituality are “freeform.”

“Witchcraft is not something that has any set rules to it,” they said. “While certain religions that are similar may [have set rules], there is nothing that forces you or stops you from doing anything. That is one of the reasons why it can be so freeing.”

From connecting to a culture or identity to relieving oneself of negative energy, spirituality has provided benefits for many people, including Vandegrift students like Hartman, Dhawal and the sophomore. But even though spirituality is a re-emerging trend, all three said that doing spirituality for yourself is very important.