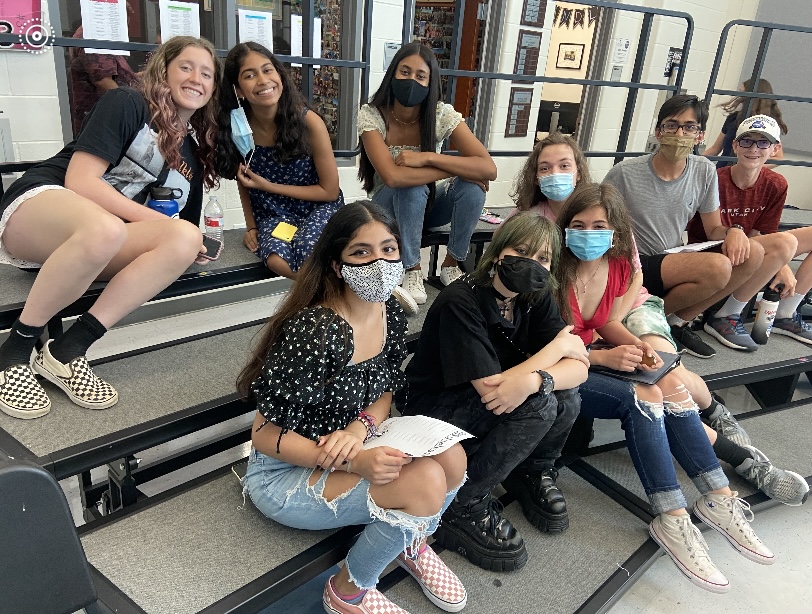 Creating a coffee shop vibe with a lively audience, a microphone is set up center stage. All around it are comfy couches, ready to seat musicians with talents to share.

“Pop Unplugged,” an annual event sponsored by choir, was held on Sept. 16 in the Viper Choir room. In this event, students perform through singing, playing music or both.

“It’s open to people who play instruments but might not necessarily be in choir,” junior Maura Connors said.

Students audition with their chosen song or instrument and those selected are the chosen features for the event.

“Unfortunately, there were only eight people that got picked so Mr. Zook requested that two students sing two songs,” Connors said. “I then prepared two songs and I ended up singing ‘Turning Page’ as well as ‘Goodbye Yellow Brick Road’ by Elton John.”

The event is a hands-off environment, so students are given the creative freedom to choose what they want to perform.

Virtual learning last school year due to COVID-19 put a strain on in-person performances, making this event one of the first for many choir students in the last year.

“I was definitely feeling a little nervous,” junior Varsha Kumar said. “The choir director [Mr. Zook] went before me and he did amazing.”

In comparison to performing in front of fellow choir friends and teachers behind a camera, standing atop a stage for parents, teachers and students alike raised the stakes.

“Performing in the spotlight is definitely a lot different than performing in front of a group of people,” Connors said. “So it’s a good opportunity to practice composure and nerves.”

Singing “Put Your Records On” by Corinne Bailey Rae with Youmans playing the piano, Kumar had a clear goal she hoped to achieve through this performance.

“I actually wanted to put more emotion in my song,” Kumar said. “I usually don’t really do that with my other performances.”

Portraying emotions to accentuate a performance was a key factor in the minds of those in the event.

“I was singing ‘Enough For You’ by Olivia Rodrigo,” Youmans said. “That’s a song about heartbreak and I’ve never had my heart broken. It was hard to capture those emotions so that’s what I was trying to do.”

Playing an instrument, Connors had a different goal: she related to the music itself rather than vocal talents.

“I think my goal this year absolutely was to push myself to learn a more complex piece as opposed to just playing chords,” Connors said. “Whenever you play music you can just play chords or you can do a more embellished piano piece. So I wanted to do something that would challenge my abilities.”

Everyone had their own inspiration, someone or something that gives them an incentive to continue to strive for greatness with their talents.

“My sister [Miley Youmans] used to be in the choir program and she always did ‘Pop Unplugged’ so I really look up to her for that,” Youmans said. “My freshman year, we did a song together that I really liked.”

Choir Director, Michael Zook, performed in the Pop Unplugged event too, giving an example of what a leading performance looks like and representing the many talents that choir has up its sleeve.

“Being able to see someone that typically is the one conducting it all and making things happen actually go up and perform was super fun,” Connors said.

Choir itself was also an inspiration because of all the talents present within the choir program, including the talents of those not featured in the showcase.

“All the people in choir are super talented,” Connors said. “That in itself is really inspiring.”

Surrounded by musicians, singers and performers who have a love for the arts and expressing their individuality sets the tone for the success of an event like Pop Unplugged.

“Everyone is so welcoming and friendly,” Kumar said. “I love having that environment around me.