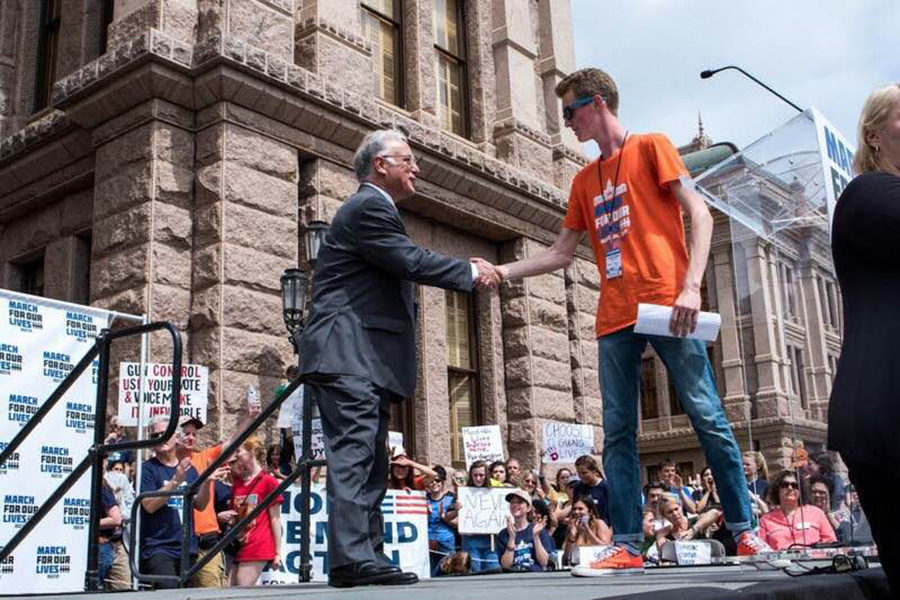 This Friday, students all over the country will stand up to participate in a wave of protests to make a difference in the country. This Friday, one student’s efforts to make a change will culminate in a Vandegrift student walkout.

On the 18th anniversary of the Columbine shooting, April 20, students will participate in a nationwide walkout in protest of gun violence. Junior Kyle Legg has coordinated one of these walkouts for the same day as our annual Valor Day ceremony.

“Although the national group calls for students to walk out at 10 a.m., after discussion with our principal, Mr. Little, in order to honor the family and the man who gave their name and his life for our campus and to safely fight for what we believe in, I am pushing students to walk out of school at 2:30, the beginning of fourth period, and to remain in the school’s courtyard,” Legg said. “If students do wish to leave campus without punishment, they require a parent approved note, but I would much prefer that we demonstrate our presence and our voice on school grounds for our safety.”

Four days after the Parkland shooting, Legg was the first Vandegrift student who volunteered to aid students in creating a March for Our Lives Austin Facebook page. After organizing the Austin march, their priority has become the national walkout.

“The message we are promoting is of nonpartisan, all-inclusive support for common sense gun reform and to push peers to get out and vote if we want to be represented and have the issues we care about actually be taken care of,” Legg said. “If our representatives, regardless of party, do not make efforts to pass legislation, we encourage voters to replace them with ones that will.”

The biggest responses to Legg’s push for change came from his fellow students, who share either their pride in having a brave classmate or their dislike with his goals.

“As with most political opinions, people will feel strongly enough about their own to either directly call out or just simply tease,” Legg said. “Most of my friends reacted in supportive manners, beginning with my Twitter account leading up to and through the women’s march, and especially now.”

Legg has received backlash from other students since he spoke up about political issues on social media and at school. This backlash has gotten greater as he organized a Vandegrift group for March for Our Lives as well as a school walkout.

Legg’s instagram posts from his private account about the march and his efforts toward the movement have almost 300 likes each. Comments on his posts range from “I’m so proud of you Kyle” and “you’re amazing and that is all” to comments like “this is stupid” and long disagreements against the march’s ideologies.

Legg’s personal drive to get involved with March for Our Lives started from watching a Stoneman Douglas student deliver a speech after the shooting.

“My spark was Emma Gonzalez’s speech, televised unbeknownst to her,” Legg said. “Your spark could be the march, or the walkout, or even me. If a peer can do it, why shouldn’t you? Without voicing our beliefs, nothing will change.”

On March 28, Legg acted as the march’s representative at the Travis County Democratic Convention. Afterward, he attended and spoke at Capitol Hill in front of 15,000 people.

After weeks of preparation, Legg said that he wasn’t scared for the speech. When he was approaching the podium, he heard support from fellow Vandegrift students.

“I could not tell you how the introduction to my speech went,” Legg said. “My memory lapse was not a product of nerves but rather of quite the opposite, presumably because I expelled all feelings of unease a few hours before.”

After speaking, Legg was immediately surrounded by march attendees who wanted to start a political conversation with him or have a photo-op.

“I could only really decompress at the neighboring Starbucks afterward with my parents and girlfriend,” Legg said. “As for the crowd’s reception, I only hope the astonishing level of applause might be matched by a multitude of reforms.”

Legg started working with March for Our Lives a month ago, but his journey to political involvement began much before that.

“My mother, being a government teacher and an informed individual, raised me in a similarly informed environment and taught me to be vocal with my opinions,” Legg said. “Another step towards my political motivation was a friend of mine, Lilyana Ibanez, who was my first peer to really push me into talking about political issues.”

Legg was first exposed to politics by watching news outlets daily and keeping up with breaking news on his phone.

“Since the Women’s March in 2017, I have participated in a few other movements,” Legg said. “But I guess I became seriously politically involved after being inspired by the brave Marjory Stone Douglas teens who rose up to take action on the face of tragedy.”

Legg’s family didn’t know he was involved with the March for our Lives until he was one of the main organizers for the event.

“He’s always been interested in politics, he’s always been one to watch the news and engage with the news,” Legg’s mother Nina Legg said. “His dad and I are super supportive and it’s exciting for me to see him become engaged and to feel like he’s empowered and that he has a voice. I wish that more kids felt that way about whatever their political philosophies are, that they do matter. I am proud, truly.”

Legg’s involvement in the march caused him to meet fellow organizers, whom he has become close friends with.

“I am most, and I guess humbly in a way, proud of what the organizers said and did,” Legg said. “These individuals left grand impacts on my life, and I think we were all just as astonished as the other at what we created.”

When they began their efforts for a march, they had hoped for a few hundred attendees. They ended up with 20,000. Their efforts are not ending with this. Within 24 hours, they were already brainstorming for other events.

Legg is unsure of his political plans for the future.

“As for right now, I am only thinking six months ahead for primaries,” Legg said. “This summer when I have time to truly take a breath, I will decide on whether or not to continue my political activity. It does seem like an important venture to consider.”

Legg has big hopes for the nationwide school walkouts and for the movement as a whole.

“I hope that our efforts alongside thousands of students across the nation in the walkout, and among 800 or so sister marches, that our nation will finally listen to us,” Legg said. “I hope that our representatives will truly represent what their constituents desire and not what a lobbyist institution does. I hope for a future in which no child and no parent feel scared upon getting off of that yellow school bus. We are children. We should worry about the 3 R’s of Readin’ Riting and ‘Rithmetic, and not the one R of AR-15.”