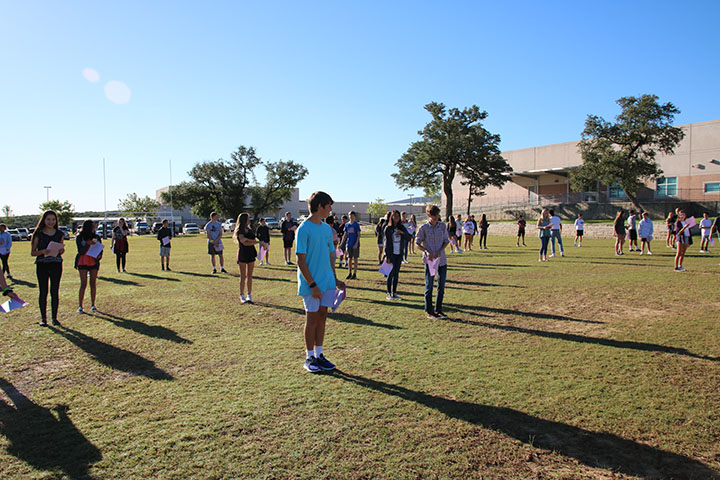 A hundred students standing on a field. A voice, booming from a tower ahead of them, asking question after question. After each question, the divide between the students grows bigger and bigger, eventually spanning the whole field. Friends separate, the students at the front keep moving up, and the students at the back keep getting forced backward.

Last Monday, freshman English classes came together to demonstrate the privilege people are either born having or born lacking. Each student was given a profile of a person who could be living in America right now. They completed questions about their persona and the possible surrounding circumstances about what they happened to be born with. After completing these questions, they moved to the practice field and stood in a line.

“This is a pre-reading activity for the novel we are about to read, which is called Make Lemonade,” freshman English teacher Rachel Hoyle said. “The characters deal with a lot of challenges and are faced with components in their lives that our students don’t have to deal with, such as food stamps, determining whether or not they want to pay the electric bill, or if they’re going to have dinner for the next night or two. We wanted to embrace that and get them in the right mindset for it.”

When the hundred students settled into a line, one of the English teachers gave the students orders over a megaphone from the top of the band tower nearby. These orders ranged from “if you grew up with more than 50 books in your home, step forward,” to “if your ancestors came to America without choice, step backward.” The students moved according to the person on their paper they were representing.

“One of my best friends was one of the first people at the front,” freshman Megan Zeltner said, who’s persona was a 16-year-old homosexual male. “His persona was an educated 45-year-old male with no kids and a good job, and obviously that versus my persona was pretty different. It definitely gave me a lot of perspective. Even if this was just a persona, I can see how it would be like that in real life.”

As the exercise continued, the distance between students from front to back grew. Finally, after about 30 questions, the exercise ended. The field, which had first been lively and filled with chatter from the students, was now silent. The students were spread out, away from their friends and anyone in the general vicinity. Through this silence, the megaphone spoke across the field once again. The participants were asked to look around and think about how they felt about their situation. They were asked to look at the obstacles the last people at the end had, and think about their own personal opinion on this scale. They were asked if they had any privilege.

“We thought that it was more important for them to see a bigger picture,” Hoyle said. “When you get 150 kids out there and they get to see that there’s four to five kids that have the opportunity to be privileged and take steps forward every single time a question has been posed compared to the students that have had to two steps back every time. It creates a bigger rift and it clearly demonstrates how lucky some people are and some people aren’t. We thought it would be interesting to bring all the kids together to give the kids more of a unified perspective.”

After the walk ended, the students went back to class and reflected on the activity. Later, they completed a poverty simulation in which they made decisions impoverished people face in their daily lives.

“They have to make actual choices that people are faced with and a couple of students in their reflection pieces so far have been almost eye-opening for me as a teacher,” Hoyle said. “I’m very excited to teach the unit at this point because I think that the activity really opened up their mindset in the sense of preparing and being empathetic for the characters that we will be reading about.”

Following Make Lemonade, the freshman English classes will be reading A Raisin in the Sun, a play about a poor black family in Chicago during the 1960s. They will use the gained perspective from this activity to further understand this work as well.

“I learned that no matter the privileges people have, you can still be associated with any kind of person you want, and also don’t take what you have for granted,” freshman Spencer Griego said. “Someone else always has it worse.”

Some students believe that this exercise opened their eyes to diversity that they do not always see in the Vandegrift community.

“We live in this super tiny place,” Zeltner said. “Our language arts teacher told us that her graduating class only had three [people of diverse races]  total and the rest were white, and then she went to UT and she saw how diverse it was there. So I think, in the bigger picture, it showed us how small our community is and that we’ll know more about diversity later.”