A byte of the real world 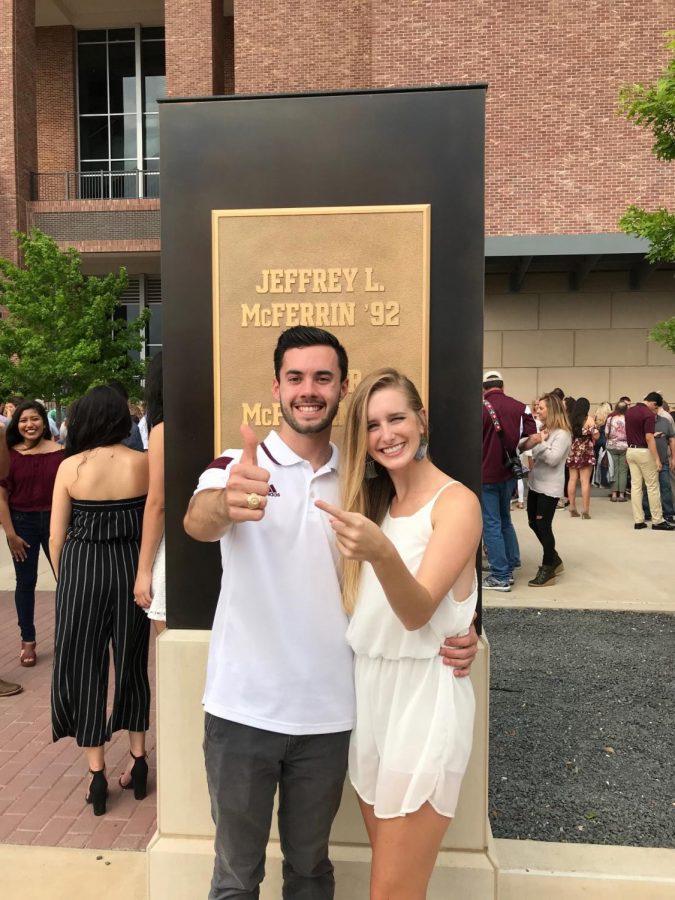 Vandegrift Alumni, Alex Lutz, poses for a picture with Elise Lutz after receiving his Aggie ring.

He beamed with pride and a sense of accomplishment as this symbol of his hard work was handed to him. His family and friends surrounded him with cheers of support and celebration. His Aggie ring. He couldn’t believe he had made it this far through high school, now college, and was soon to be a software engineer.

Vandegrift alumni, Alex Lutz, is a software engineer for Charles Schwab and graduated Texas A&M University in 2019 with a degree in computer science. He leads a small group at Hill Country Bible Church Steiner with 10th grade boys and has been married to Elise Lutz for just over a year.

“I love the problem solving aspect of being a software engineer,” Lutz said. “It can be really frustrating when you spend eight hours of a day staring at your computer banging your head against the desk, but when you figure it out, it’s so satisfying.”

As with all careers, Lutz described some of the biggest challenges to his job. He said that although you wouldn’t think about it, communication in his work place is a major part of being a software engineer.

Lutz credits Vandegrift for preparing him for college and even now in his workplace. He said that Vandegrift always kept it real in many aspects.

“I didn’t feel like I was sheltered when I was at Vandegrift, everything was very real,” Lutz said. “With the competitiveness of the education system or just like interacting with people. People might say that’s not great, but a lot of my friends who went to private schools who had it differently than I did, you could just see the contrast of our exposure. And academically, Vandegrift prepared me really well for college.”

He also said that many of his teachers in Vandegrift were influential in his life. Lutz was grateful to his math teachers such as Mr. Meadows, Mrs. Raitt, and many others who were all wonderful teachers.

“Dr. Connor used to be the anatomy and physiology teacher and she was awesome,” Lutz said. “She really saw her students as people and tried to build relationships with them, and all the students felt like they were connected to her.”

Lutz said that throughout his college experience, he learned that having a good balance of work and entertainment in his life really helped him make it through a large load of work.

“In college and the professional world as well, you’re gonna have to work your butt off,” Lutz said. “One of the things that kept me sane, but also made my college experience so great was making sure that I had time to do things that I wanted to do, whether that was getting involved in church, doing something dumb with my friends, or playing intramural sports in college.”

Although Lutz has just graduated college, he said that his faith as a Christian is what drives him to do his best in his workplace, interacting with people and in every aspect of his life.

“I think what drives me is the possibility of positively impacting the lives of other people,” Lutz said. “And for me, that’s rooted in my faith in Jesus. Finding different ways to realize how something can positively impact somebody’s life motivates me to keep doing what I’m doing.”

Lutz said that being a Christian has led him to become a small group leader for sophomore boys at his church.

“It’s such a cool opportunity to be in a group where I get to pass down my wisdom to the youth,” Lutz said. “And that’s not wisdom from being super smart or making all these right decisions, it’s more all the things that I’ve done wrong in my life, the mistakes that I’ve made.”

Sophomore Graham Korensky is in Lutz’s small group and admires him for his faithfulness to God as well as his role as a mentor in Korensky’s life.

“For me, as someone who wants to do the same thing as my Grandpa, I think it’s really easy to say I am comfortable where I am, and not want to take that next step and let life get uncomfortable,” Lutz said. “But to see what my grandpa’s done already really inspires me.”

Although Lutz has not been out in the professional world for long, he has learned many valuable lessons along the way and said he has many great influences guiding him through life.

“I think one of the biggest lessons I’ve learned in life is to not pass up on an opportunity because it’s scary,” Lutz said. “I think there are a lot of times where I think I’m not qualified to do something. But I’ve learned that when I jump into those things, even if I fail or really suck at it at first, those have been the times where I’ve had the most personal growth.”