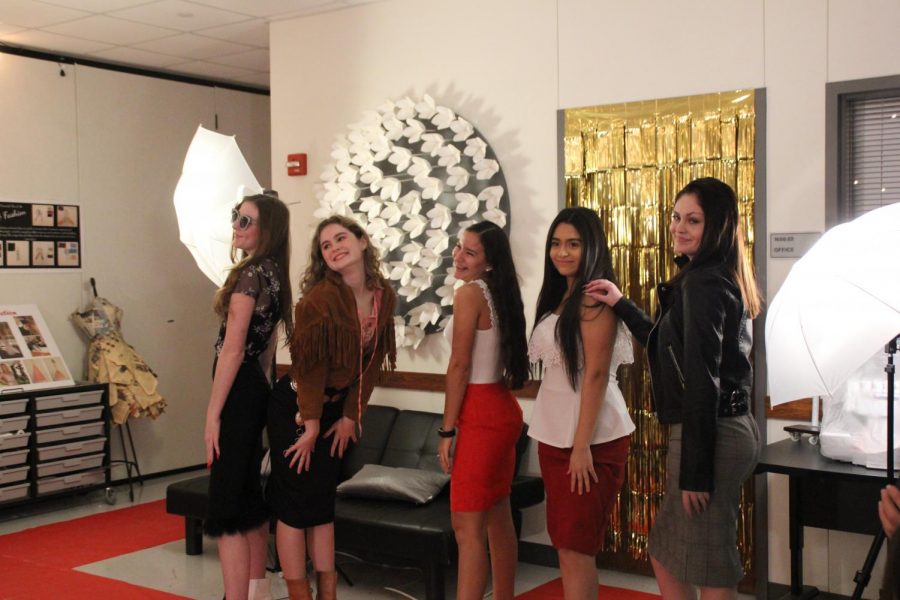 Sitting in the dim room, the packed crowd hushed as the upbeat music began to play through the speakers. All eyes drifted toward the door draped in gold at the end of the red carpet. It was time to see what these future fashion workers could do.

Today the fashion design two class put on a fashion show for parents, students, teachers and school administrators. The six upper-level fashion design students transformed their classroom into a Hollywood Glam themed runway, complete with a red carpet between the rows of people. This is the second year of having fashion two offered as a class and the second fashion show the class has done.

“[Fashion two] is for students who really are interested in fashion construction and [want to learn] very specific techniques based on industry standards,” fashion two teacher Stacey Pomerantz said. “[They] really are interested in some aspect of the fashion industry, whether it be construction or even marketing or becoming a buyer for an institution or design house. So the students in the class really have to take it seriously because it’s so much.”

“I had just volunteered at a fashion show in Austin with different professional designers from Project Runway and things like that,” Gilbert said. “It was a really big two-day event and so I just took my knowledge I got from there and helped put this together.”

Pomerantz said that fashion three students get the opportunity to partner with industries to build more knowledge about the fashion industry and make connections. At the show Gilbert volunteered at, she observed the coordinator of that show to learn what she would need to do in this production at the school.

“After watching the coordinator, I knew what to do,” Gilbert said. “[My job was] making sure all the models were good and out on the runway and handling timing and all of that. It was a really fun experience and it helped me bring out my leadership skills, which is something that I do enjoy.”

The students worked on their pieces for about a month, each designing their own unique pencil skirts. They got to put together two outfits for the show, one professional and one that expressed their personality and individual style.

“For my skirt, I just picked black because I wanted it to be very simple and versatile,” Kimball said. “It’s just kind of simple. Other people chose different colors, but I wanted to just keep mine black so it looks simple. I’m really proud that I finished the skirt, I definitely didn’t think I was going to finish it especially so quick because we didn’t get too much time.”

In addition to making the skirt, the students also helped get the classroom ready for the show and practiced their runway walks. Each student had different roles in preparing, some setting up lights, some making invitations and others laying down the red carpet. For the bigger decisions like music and theme, though, it was a group decision.

“I loved a little something in everyone’s outfit,” Pomerantz said. “Like, it was the attitude and the rhythm and the body language that the students portrayed as they were wearing something they’re really proud of, that I think is what I’m proudest of.”