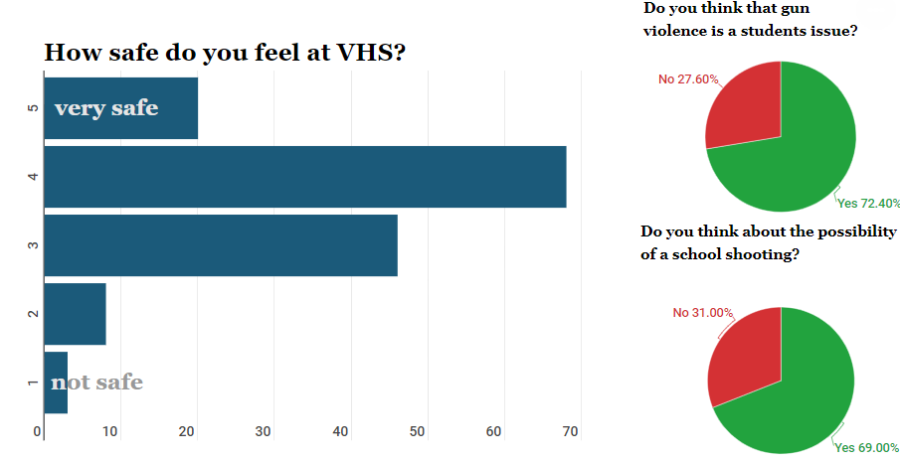 Graphic made by Natalie Brink

Generation Z is known as the school shooting generation. That means they have complicated school entry systems, lockdown drills, and are taught from a young age what to do if someone points a gun at them.

From the get-go junior Jackson Trevino disagrees with what he’s been taught- the stereotypical lights off, against the wall, silent solution- saying that if there was a shooter here at Vandegrift he’d approach the situation differently.

“If the shooter did get into the room we’re all in the same area and we’d be easy targets,” Trevino said. “I know for a fact that if that was happening I wouldn’t sit in the corner. I would find something else to do, like throwing a textbook at them. I feel like we’d have a better chance if someone went after them instead of just sitting there and doing nothing.”

Like Trevino, junior Brandon Landry doesn’t want to be a sitting duck in an active shooter situation. He believes by arming teachers students’ fear of being unprotected in their classrooms could be eliminated.

“I would feel so much safer in our school right now if I knew my teachers were trained and knew how to use a pistol in order to defend me and my fellow classmates,” Landry said.

Landry explains the best ways to prevent school shootings would include posting guards armed with AR15s around campuses, encouraging students to use the anonymous alerts system and ensure teachers, who are willing, go through a training program on how to use a pistol. He said this kind of program would teach educators how to properly use, conceal, and store an issued pistol to make it accessible to the teacher but not to a student who might take it.

“Everyone here is responsible for each other and even though it might be stereotypical you should look out for people showing signs that they are depressed or making threats and jokes about shooting up schools or often expressing hate towards teachers,” Landry said. “You shouldn’t take that lightly and you should make sure to report it if you have any suspicions.”

School shooting jokes are actually common even here, or at least according to  junior Yasmine Ahmed. She said one time she walked into class late one morning and forgot to say the Texas pledge and was yelled at in front of her entire class by a classmate claiming she was disrespecting the country by not speaking the pledge. Ahmed is from California where a state pledge isn’t part of the curriculum and her forgetfulness had nothing to do with a political statement.

“After that people kept coming up to me and making school shooting jokes like ‘oh watch out he could be a shooter,’” Ahmed said. “That whole experience makes you really aware of how it’s a joke, but it shouldn’t be a joke because it could be us right?

Ahmed does think the new safety measures the district has put into place are beneficial, especially the doors separating hallways because they offer a lot of protection from a potential shooter, unlike Trevino who doesn’t agree with the lockdown procedures.

“I feel like even with the new lockdown procedures, the cafeteria doors are always unlocked and that’s such an easy target, especially during lunch when everyone is in there,” Trevino said. “It has a bunch of doors and it’s all open and glass and I know the APs are there, but that’s not much. There are just so many other ways to enter the school and blend in.”

Trevino referenced the 2018 Parkland shooting and how the shooter pulled the fire alarm to get kids out of their classes because he knew the lockdown procedures due to having just graduated Marjory Stoneman Douglas.

“I feel like a lot of us students just living in this climate never know what could happen when it comes to gun violence because when I enter a new classroom or even a movie theatre the first thing I do is think about what would happen if someone were to come in with a gun, like hiding places and what exits to use,” Ahmed said. “This is something our parents never had to think about, but nowadays it’s always in the back of our minds.”

It’s common for students to feel the threat of a shooting, but that doesn’t mean it should be. We’ve become divided by political agendas and have lost sight of the most important part of life: actually living. We’re all scared. We may have different opinions on what the answer is, but they’re just each person’s fear coming out differently. We’re all terrified of being next.