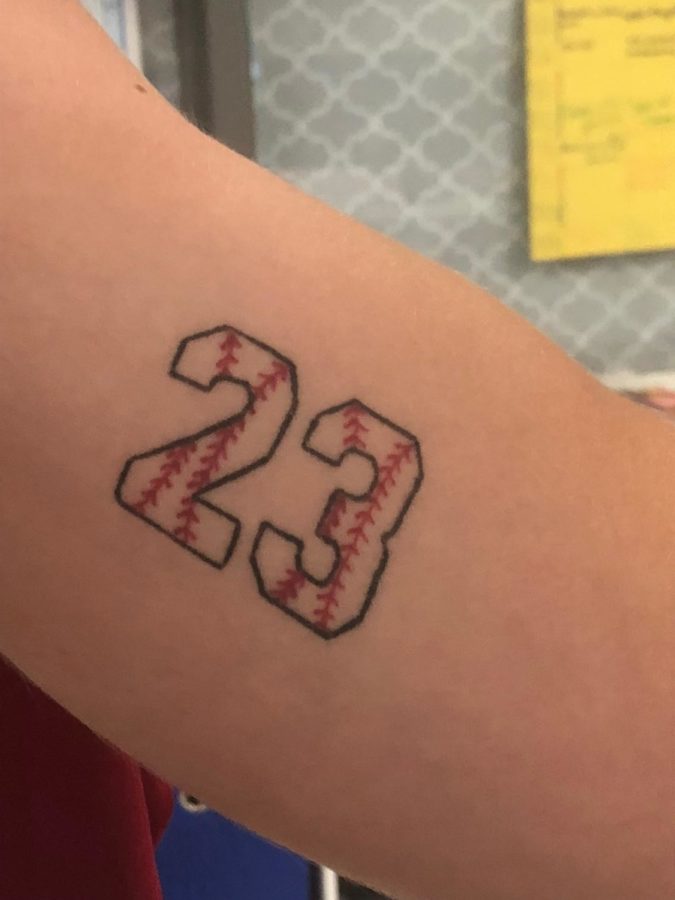 Senior Peyton Klam shows his tattoo of the number 23 on his bicep.

Getting tattoos has become a popular trend among teenagers. Many high school seniors don’t hesitate to begin this permanent journey as soon as they turn 18.

Senior Peyton Klam got his first tattoo and it wasn’t just any random drawing, but rather one that had a meaningful place in his heart. Klam has the number 23 on his bicep with baseball stitches inside because it represents the number he’s been wearing his whole life and also the number his dad wore all throughout his sport career.

“Obviously, the number 23 has had a big impact on my life, and once I go off and play for college and hopefully professionally, if I don’t have number 23, like the actual number on my jersey, then I will always have the number 23 on me,” Klam said. “When it’s something significant, and it means something to you, I am happy that I have this number on me.”

Senior Kyndall Cragg also has a meaning tattoo similar to Klam. Cragg has the word “live” tattooed on her side rib.

“Me and my mom wanted to go get a tattoo on mother’s day and I just wanted to get something simple and cute,” Cragg said. “[It represents] how much I love the life I live everyday.”

Similar to Cragg, senior Blakely Dimiero also got a matching tattoo with her mom. Dimiero has a tattoo of a bumblebee on her wrist. She said it holds a significance because a lot of her family calls names based off of a bumblebee.

“My tattoo is special to me because I share a bee tattoo with my mom and it just represents me and everything about me,” Dimiero said. “I was inspired to get this tattoo because I have always been referred to as “bee” and “bum” after bumblebee.”

Senior Zachariah Sagebiel is another student that got his first tattoo with meaning attached to it. His large shoulder piece illustrates a deer skull and two deer tracks that give him a

special connection to his dad. His tattoo was one of the pricier choices, ranging in from $200 to $500.

“I’ve always been a really avid hunter, it’s always been something that meant a lot to me,” Sagebiel said. “I looked around at different tattoo artists and looked at what kind of styles th

ey were into and made sure they were good enough. I kind of like the art aspect of it. I’ve always really liked realistic art.”

Senior Dimitri McCann said most of his tattoos represent his hometown and many cultures he admires. Most of his were also paid at a discount price from a family friend and has never paid more than $150 for a piece of work.

“They get addicting,” McCann said. “After you have one you just kind of start wanting more. I already want to fill up more space on my arm. I want to do some words from my collarbone to my other collarbone in the future and even get a phrase in French that says ‘good heart; bad head’.”