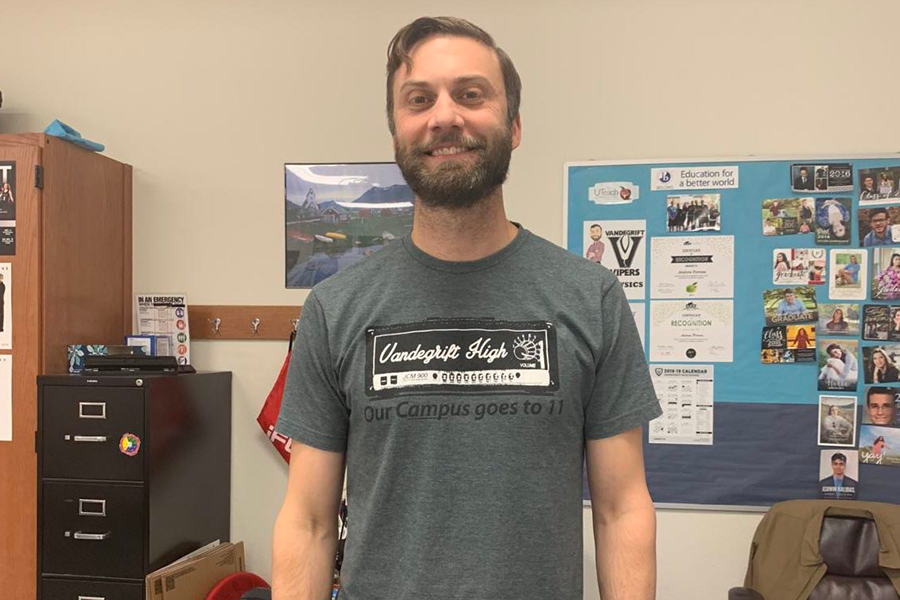 Mr. Perrone in his classroom.

For some teachers, you see their passion for teaching and the curriculum as you listen to them talk. Physics teacher Andrew Perrone is one of those teachers. He enjoys coming to work and has a passion for the subject. Mr.Perrone has been teaching for 9 years, all at VHS. He teaches Pre-AP and IB Physics as well as assist with Viper Robotics. Mr.Perrone loves to read, and was captured by physics intrigue, eventually pushing him to pursue a career in teaching.

“No, I haven’t dreamt of being a teacher as a kid, when I was in college i thought I might become a college professor because I enjoyed teaching. I ended up changing my mind and deciding I wanted to teach at a lower level, there is more engagement with students at the highschool level than college.”

What subjects did you enjoy when you were in school?

“In highschool I loved math courses such as calculus,Ii was always good at math, that’s probably the reason I really enjoyed it. Interestingly, I wasn’t partially interested in science classes when I was as kid, that all came later. My first major in college was in Economics, I got a degree in economics from Texas A&M. My second degree is a physics degree from UT Austin.”

What did you do prior to teaching?

“After I graduated from A&M with my economics degree, I got a job doing financial analysis for American Airlines. It was right after 9/11 so it was a crazy time in the airline industry, there was actually some uncertainty as if they would actually hire me even even though they told me they would prior to 9/11. Eventually, they were able to take me on after a delay, I worked there up until I decided to study physics at UT. I created budgets for various airports, and the American Airlines operations at those airports. I also flew around the world which was a great benefit to working with them.”

Why did you decide to study physics?

“I fell in love with physics while I was working for American Airlines. My interest was triggered by a book that has not only affected me, but has affected probably 100,000 people. It is Stephen Hawking’s ‘A Brief History of Time’. It’s a very famous book and that book captured my interest in physics and kind of lead to an obsession that took over all my time outside of working at American Airlines. I read books, I studied physics in textbooks on my own in the evenings and weekends, and ultimately I decided to leave this kind of boring job at American Airlines and just go figure out something to do with physics because the subject was just too cool.”

Has anything about being a teacher changed your life in any way?

“Being a teacher s a very different life than the one I led at American Airlines for example. Contrasting working at a dynamic high school where I get new students every year, going to games, going to theatre productions, having the back and forth communication with young people who are still excited about the world and get the opportunity to head off into it. it’s a lot more fun than sitting in a cubicle alone and typing which is what used to be doing. There are Pros and Cons to be a teacher, the day to day is much more interesting to me and I get to be more creative in my work. I really appreciate the fact that students are serious about their learning and about education, and put forth effort and try to do well at Vandegrift. It not like that at all schools, sometimes teachers have to put a great deal of effort trying to get students to pay attention, but I love the fact that so many students here are self motivated, it make my job easier and that’s something special about VHS that you don’t find at a lot of schools.”

Do you have any advice for a senior about to leave?

“Don’t feel like you need to have it all figured out yet. There is a lot of pressure when your a junior to find out what college you want to go to, there is a lot of pressure your senior year and as you transition into college to pick the right major and get on the right path… but don’t think you need to have it all figured it out yet. I remember being in high school not knowing what I wanted to major in, I think the choice to major in economics came kinda late and I wasn’t even sure it was the right call. It’s hard to know what you want to do when you haven’t tried it out, which is one reason why COOL week is really neat so kids can try out occupations. I got one major and decided to go back and get a second major, and that is possible. There is a lot of stress when you feel like you have to make important decisions really early in life, there is some wiggle room though. I would say persevere, a lot of success comes from perseverance and not giving up, but don’t forget to have a little fun along the way.”