Seniors talk about expectations for season after successful first game 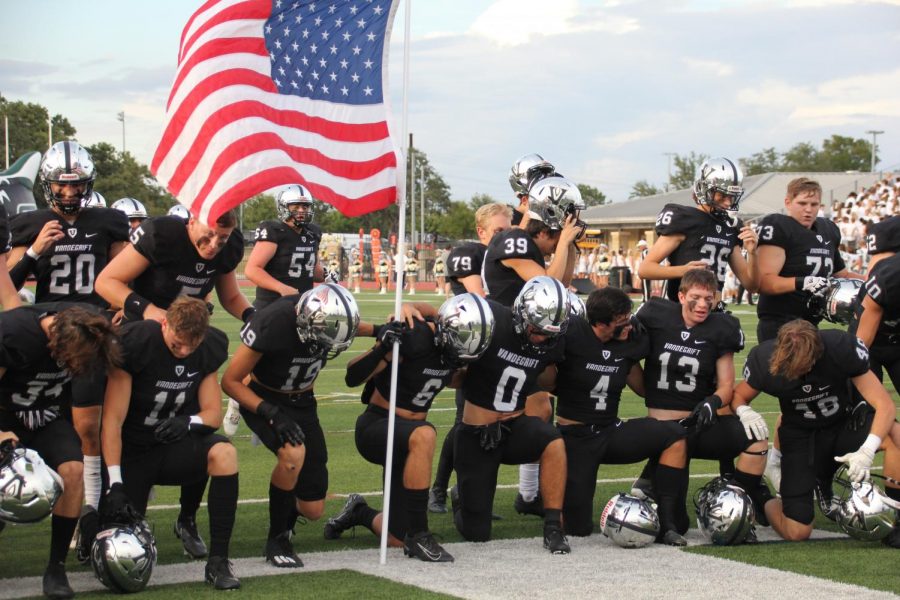 There were 20 seconds left of the fourth quarter, the VHS football team was aiming for a final touchdown, and the crowd was  going wild in the stands, cheering them on. Soon enough, the 20 seconds were over, and the football team started cheering and screaming, as they defeated Cedar Park in their first game of the season with a score of 42-7.

“We dominated from start to finish,” senior Clayton Moore said. “It felt great to beat a worthy opponent so handley and it’s a win that we’ll build off of for the rest of the season.”

The Cedar Park game was completely sold out, as it is most years.  Senior Griffin Shaffer was glad to see fans in the bleachers as the team didn’t get to experience that last year.

“It was really cool seeing the student section packed and seeing everyone back,” senior captain Griffin Shaffer said. “we’d been gone for like two years at that point, so it just felt good being back to normal,”

At last year’s Vandegrift vs. Cedar Park game, Vandegrift lost with a score of 21-7, but were able to make their comeback this year.

“That was my first time ever losing to them, so being able to come back and beat them felt pretty amazing,” Spring said. “Going into the game, I was nervous, excited, and got goosebumps, but then after the first drive I was like, alright, this is gonna be a blowout.”

Moore and the rest of the team are aiming high this season by exceeding an accomplishment that happened last season to prove that they can win just like the team last year did.

“We want to exceed last year’s accomplishments and win a state championship because we know we have the ability to do so as a team,” Moore said.

As captain of this year’s football team, Shaffer was impressed with the team’s performance and the win they pulled off.

“We worked all our time and it for it be the last time we played Cedar Park. I’m happy it ended this way,” Shaffer said. “Coach Sanders has developed our young juniors and sophomores and freshman class to rebuild the program each and every year so I’m excited to see what’s about to come.”

Even though the loss against Cedar Park last year was hard on the football players as they never forgot about that day, Spring said losing to them made the team work harder and more confident.

“We hadn’t forgotten the feeling of losing last year so we kept a chip on our shoulder for this year and came out confident and ready to win, Spring said.”

To Moore, beating Cedar Park was not just a normal win to him, it was a special win and win that he will never forget.

“I, along with most of my teammates, have played them since the start of middle school and our games have always been a kind of rivalry,” Moore said. “Going up against them for the last time was surreal which made winning that more special.”