Cheer does well at competition in coed division 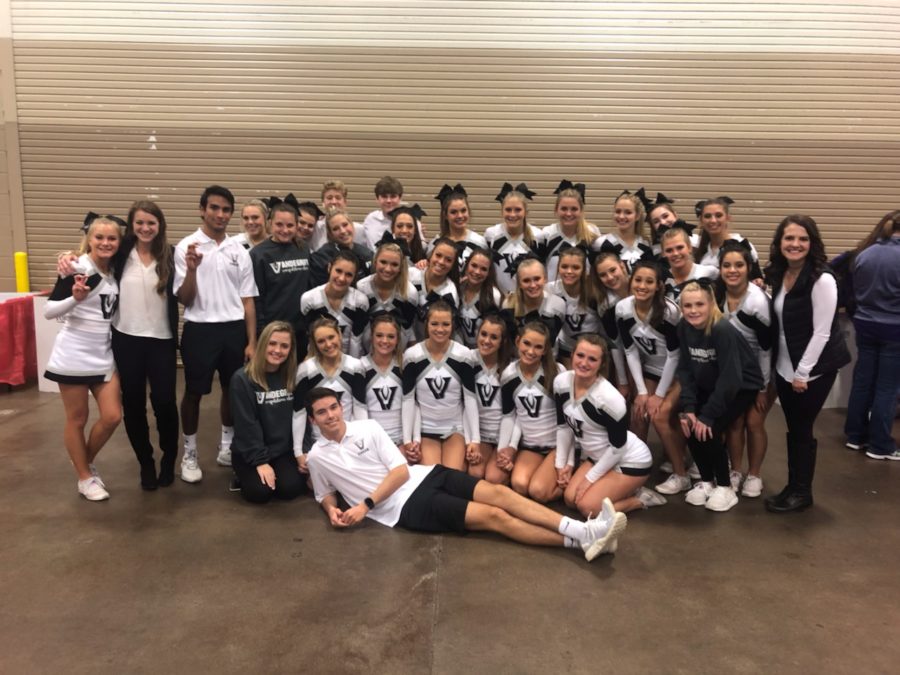 After doing well in previous years but not completely satisfied with their results, the cheer team changed their strategy at the UIL competition last week in Dallas. The team competed in the coed division for the first time after adding four boys to their roster in November. The plan worked and the squad placed first overall for fight song and fourth overall in state.

“We thought it would be something different to try,” head cheer coach, Coach Roughton said. “We have been 6A for the past few years and, even though we had been doing really well, our results weren’t very reflective of the talent that we had, so we thought that changing our divisions would be able to showcase our skills better and have a higher probability of winning a state championship.”

Seniors Maicol Salazar and Dylan Maraist and sophomores Parker Payne and Josh Branstetter joined the team as flag boys. Their main was role was to stand behind the team and wave flags to promote spirit during the routine.

“[The boys] made the competition easier in the sense that I got to utilize all of my girls on the floor and utilize their skills instead of having some of them in the back waving the flags,” Roughton said. “It’s hard when you have a very talented cheerleader waving the flag when they could be on the floor showcasing their skills.”

Ordinarily, the coaches would have to assign a small number of the female cheerleaders to do signs in the back, but this year every cheerleader got to show off their skills for the judges thanks to the boys stepping up.

“I was a flag boy, but I think more than that, all four of us boys were sort of a motivator for the rest of the team,” Branstetter said. “[The whole experience was] lots of fun, it was a great way to make new friends. [I got to try and] inspire others and try to get them to do their best.”

Roughton said that she plans on continuing competing in the coed division and even hopes to get Payne and Branstetter to learn how to stunt.

“I think it’s going to be a lot of fun,” Branstetter said. “I tried [stunting] a little bit already and it was really fun, it’s going to be a cool experience and I think we’re going to place a lot better if we do learn to stunt. I think if we place better, like top three, that’s going to be one of the best things for Vandegrift.”

Also working to motivate the team alongside the boys was senior captain Amelia Milam who noted the importance of keeping everyone on the team working hard.

“I make sure that everyone is held accountable for their position on the team because every single one of us is important,” Milam said. “If one of us messes up then it affects everyone and every single persons motion and voice is extremely important. So, I help to keep everyone motivated and excited for cheer.”

That motivation did not go unnoticed, the team’s ability to keep up stamina and maintain their work ethic made quite an impact, especially when it came to taking away the cheerleaders’ nerves before competition.

“Honestly, I wasn’t really worried because we practiced so many times before and we had to run over break which helped keep our stamina up,” senior Kendall Mullins said. “On top of all that, when we came back, we kept working because we knew it was time to compete and we knew we needed to get our head in the game.”

Milam discussed that one of the biggest differences she noticed on the team beyond the new placements was how close the team was. She said that in comparison to previous years where she felt as if she didn’t know a lot of her teammates, she believes that this year she knows everyone on a very personal level.

“The biggest difference [for this years team] I think is how close we are.” Milam said. “I think that really helped us to motivate each other with stunting and making sure that everyone hit what they were supposed to on time and being excited to come to practice and making lots of memories.”