Seeing beyond with ‘The Giver’ 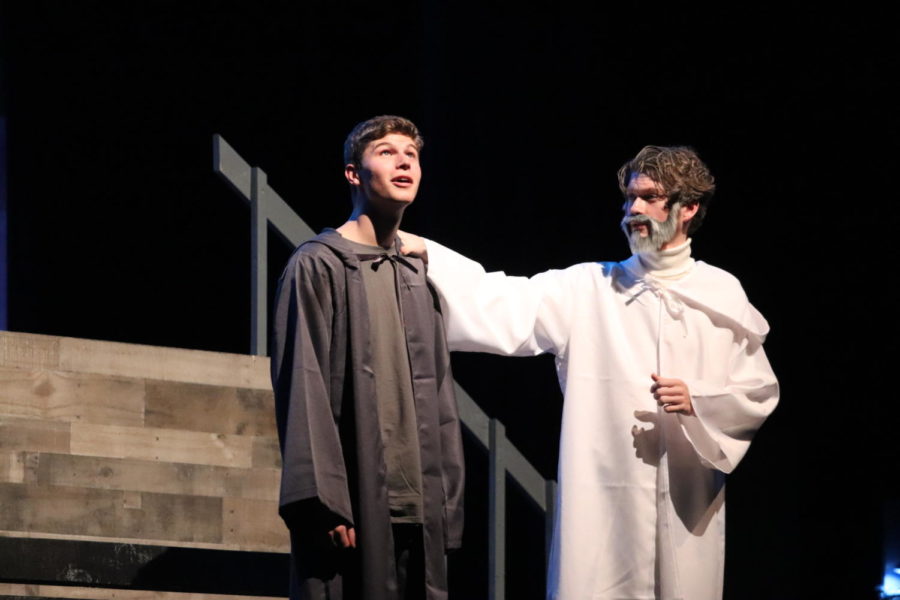 I sat in the audience waiting for the lights to dim, except they didn’t. All of a sudden, voices came from around the room as actors drifted through the audience, whispering in response to a voice coming from a microphone backstage. I knew then that spending my Friday night at school was, maybe for once, going to be more than worth it.

The theatre department put on their winter play, “The Giver” last Friday and Saturday. The show made history as the school’s first main stage play to be directed by a student, senior Kayla Stewart.

The show focuses on the lead, Jonas, and the discovery of his emotional capacity in a dystopian society that thrives on a life devoid of emotion, color, seasons and more. The contrast between Jonas’ intense feelings and reactions to sunlight and warfare and the monotone way his society responds is a feat, especially because actors rely heavily on expressing the emotions of their character to convey the storyline. However, the cast of “The Giver” was able to fully express their show, through Jonas’ bursts of emotion and his schoolmates void and confused responses. As Jonas experiences the memories The Giver gives him, he starts to see color. Memories are depicted through colored lights shone on the stage and a backdrop screen with a picture of what Jonas is reliving, such as snow. The excellent incorporation of a tech crew in the show only made it more worthwhile, emphasizing the most crucial moments of the story with a memory that was palpable for the audience.

For a play that’s torn between emotion and the absence of it, I was surprised to find myself laughing embarrassingly in the front row at the shrewd remarks and strange questions the actors asked. It was an interesting approach at humor because for the characters in the story, it wasn’t funny. It’s just life. For the audience, it was entertaining to say the least when hippopotamuses and elephants were referred to as “make believe” creatures.

Overall, I found the show incredibly well done, especially for a student directed production, and even saw it twice. It featured mature themes with the lightness of an adolescent discovering the world isn’t so innocent, reflecting the actuality of our own society and how inescapable emotion is.