Upperclassmen speak out on parking situation 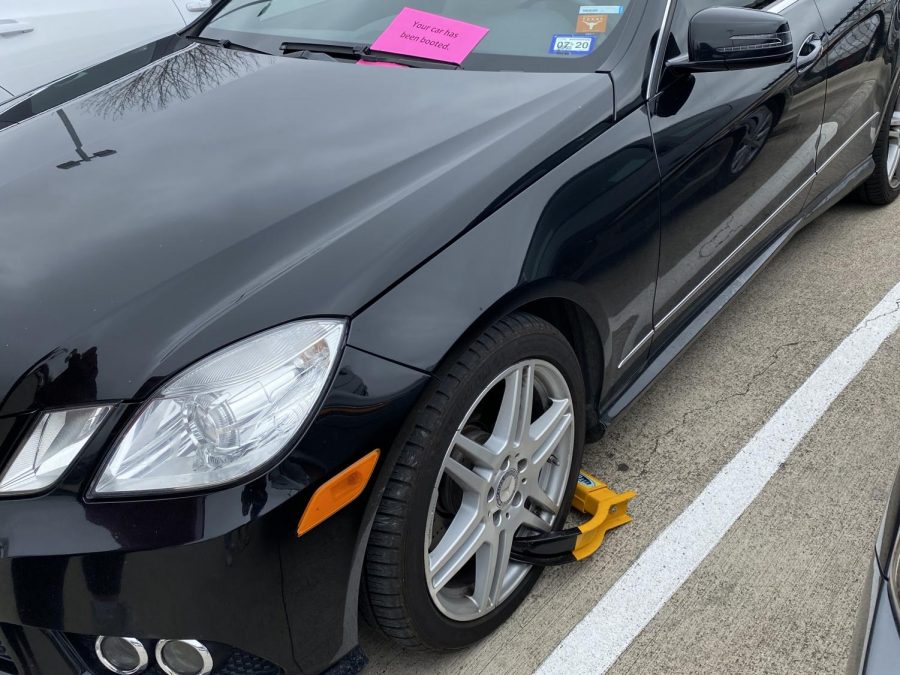 Unidentified car without parking pass gets booted in front lot.

Without a full-time parking attendant last semester to monitor who is parking in the school’s five lots, the parking situation is becoming increasingly worse as more students are driving to school in the spring.

Parking passes are sold at the beginning of the year for $40, with priority given to seniors, then juniors. Every year they sell out on the first day and many juniors do not even have the option to purchase passes because of the demand and lack of parking spots. Lately, underclassmen who do not have a parking pass have begun to park in the school’s five lots, taking spots that should be reserved for students who paid for a pass.

The parking situation is causing tension among grade levels. Upperclassmen who bought parking passes feel as though they should always have a parking spot, as they have paid for the privilege. They also believe that individuals who did not purchase a parking pass at the beginning of the year do not deserve to park in the school lots. After receiving much backlash from upperclassmen, sophomores who have admittedly parked in the school lot without passes have said that the responses from juniors and seniors are simply angering them and causing them to lose respect for the upperclassmen.

The tension between classes has moved on to social media, many underclassmen have lashed out at upperclassmen in the form of private messages and private stories on Snapchat. Upperclassmen feel disrespected and that the students without passes should respect the system. Those without a pass believe they should be able to park wherever they can find a spot. Parking on-campus is a privilege, not one that comes with owning a car. Students must pay for a pass to park legally on campus.

The school has used a pay-to-park system with passes since its opening in 2009 and is consistent with all LISD high schools. Previously, this system has been enforced and respected. This year, students without passes have continuously abused the absence of a parking attendant. Students that have paid for a parking spot on campus struggle to find a parking place in the morning before class and have resorted to parking on marked “No Parking” zones where they then receive tickets. Meanwhile, those who are in the lot illegally are not receiving repercussions that are making them stop.

Previous repercussions for breaking school parking rules include $5 tickets, being booted (which costs $20 to remove) and in extreme cases, being towed. These have been sufficient consequences in the past, but don’t seem to phase the class of 2022. Many sophomores said that parking violations don’t scare them and they will continue to park even after receiving tickets. Clearly, the punishments currently in place are no longer effective and should be updated accordingly.

Most curbs on campus are marked as no parking zones to keep the rows clear, prevent accidents and increase student safety. Currently, the parking lot is overcrowded with cars crammed onto curbs, sticking out and posing a real danger to drivers and pedestrians. The school has not sold more passes than spots but still, because of the number of students parking without passes, the parking lot has become a maze. It has become hard to navigate and visibility for pedestrians has been significantly reduced.

There are other options for people without passes, like parallel parking on McNeil Drive, the road leading into the school has been an option utilized for years, and neglected recently. It is right next to campus and is not school property which in turn, allows anyone to park there. Alternately, carpooling with a sibling or friend which would also help cut down on the demand for parking and traffic before and after school. The school should also consider opening the “band lot” during the second semester, when most sophomores get their licenses because the band does not use the field after school. It is open occasionally and when it is, finding parking becomes much easier.

Even with the return of a parking attendant, the school needs to rethink the policies so students who bought a pass are guaranteed a spot and students without a pass are not allowed to take a spot they didn’t pay for.