We need you to panic 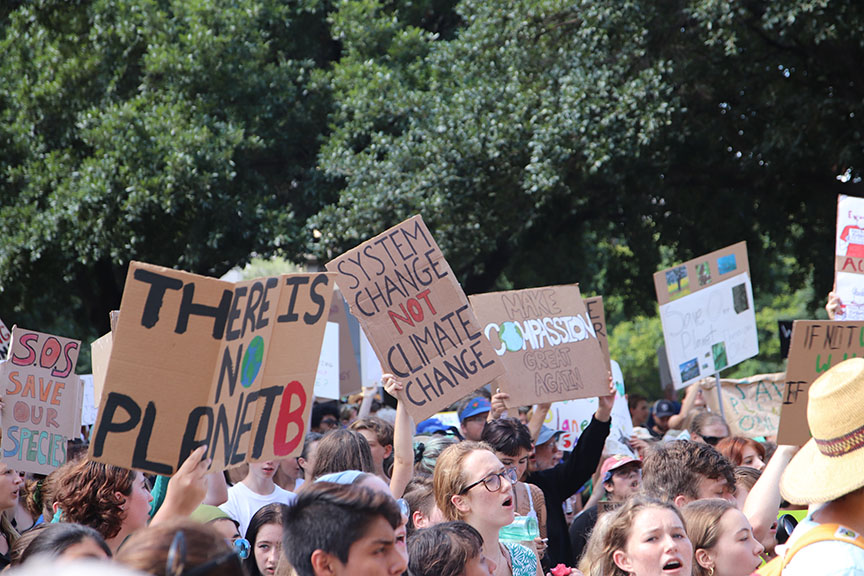 Students gather at the capitol to advocate for measures to protect the earth.

I’m standing in a crowd of sweaty, indignant, sign baring bodies packed outside the Austin capitol building. It’s around 100 degrees and I’ve never been this exhausted in my life, but the energy is palpable. I see signs that demand change, saying things like “we need you to panic” and “climate change is not a liberal conspiracy.” My first thought is- this is my element.

From an early age I was taught to take care of my surroundings, to leave them better than I found them, which was a byproduct of growing up with an environmental attorney for a mother. She was constantly bringing home birds to rescue, writing grants and she served on the Alliance for the Great Lakes board for several years when we lived in Chicago. It’s safe to say I was raised to be an environmental activist. When I moved to Texas and realized there are people who don’t believe in climate change I was confused and outraged. Then when a friend who works with the Austin Climate Coalition approached me to ask if I’d be interested in walking out for the global climate strike I leapt at the opportunity.

Witnessing the speeches of climate activists from local students to well known politician Wendy Davis and former human rights lawyer Mike Siegel was moving. A hush fell over the crowd as they spoke. When there was a pause in testimony the crowd would roar their support. The crowd of young activists ranging from small children to grandmothers directed their anger at politicians doing nothing to protect our planet. In no uncertain terms it was a powerful gathering of people who have the power to protect the world, and would like to do just that.

I am one of many Vandegrift students who sport a badge of honor for this rally, an unexcused absence we all had to take because we are trying to make a point. At the rally I learned the power that a 16-year-old can have and that self advocacy is crucial to protecting the world, especially for our generation. I want to continue to advocate for my future and the futures of my peers.