An analysis and review of one of punk’s most remarkable albums: Patti Smith’s “Horses” 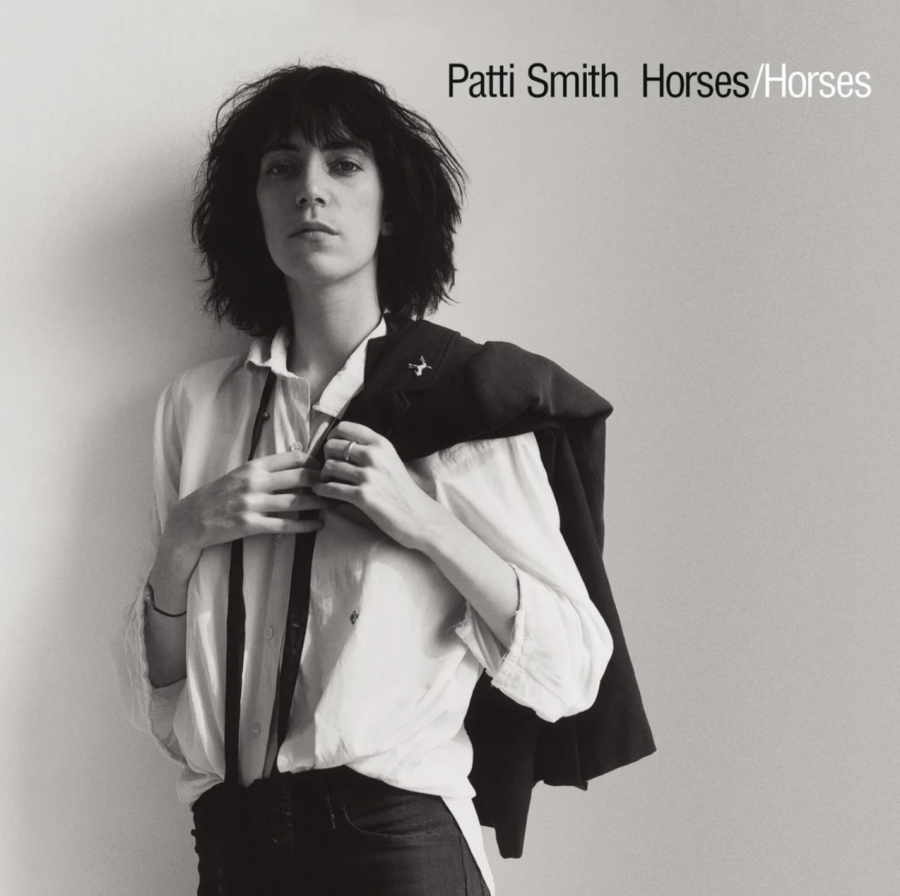 Shortly after moving to New York City in the late 60’s, young artist  Patti Smith spent time drawing, reading Rimbaud, working at a bookstore, listening to The Velvet Underground and, most notably, writing poetry. Through these explorative years emerged Smith’s first full album, released in 1975: Horses. Partly highlighting her experiences and devotion to the underground rock scene in New York City, this eight track album is a mix of raw poetry and sung emotion that appeals to the aspiring artists and tenacious souls of the world.

Beginning with a punch, Smith covers Van Morisson’s “Gloria” whilst adding a few twisted lyrics of her own like “Jesus died for somebody’s sins but not mine.” Smith’s words are crisply enunciated, emphasizing the seriousness of her tone. Synchronized, the music and her voice go hand in hand together, creating a bold wave of sound for any listener, especially for the first track of the album. Ending with the beginning phrase of “Jesus died for somebody’s sins but not mine,” Smith creates a lasting effect on the emotion she’s trying to convey.

Through much of her music throughout this album, Smith’s versatility in her voice and unique sound creates an outlandish feel, as if drifting through another dimension. In track two, “Redondo Beach,” the music is almost tropical as is her voice through the beginning. Shifting to the next track, “Birdland,” a wild nine minute long story acted through voice and instruments,  based on “A Book of Dreams,” a 1973 child memoir of Austrian psychoanalyst Wilhelm Reich by his son Peter. A hint at Smith’s own love of literature and her many inspirations from books, poets like Rimbaud and words from fellow friends she met along the way like Sam Wagstaff and Robert Mapplethorpe.

In this nine minute long song, Smith truly embodies the child, conveying every fighting emotion at its utmost. Lyrics such as

“Grabbing at his cheeks, taking out his neck,

All his limbs, everything twisted and he said,

are sung so desperately that listeners can feel the struggle and fight for control, for air, whilst she screeches “taking out his neck.” In the overly emphasized “everything twisted,” Smith displays all the power and likeness in the character’s eyes of her story. Filled with fight and ambition, the desire in “I won’t give up, won’t give up, don’t let me give up,” is one back to desperation and conflict. A roller coaster of words, there’s multiple sections of the song where Smith resorts to a jumble of sounds and half words to convey emotion when words aren’t fitting enough. In its end, a jazzy repetition of

Next track and middle of the album is “Free Money.” A reference to her own financial struggles of being a young artist trying to make due. Measly money from working at a bookstore to resorting to stealing art supplies with fellow friend and lover at the time, Robert Mapplethorpe, this song highlights her broke days. With this album, dreams are heavy and important, with the desire to be successful and not have to worry over stresses like money and an unwanted job. Even in her ambition and passion for art, the struggle for money creeps its way in through this song, taking a place in her first album. Underscoring her late night thoughts of financial struggles that seep even into a source of creativity: her dreams. The lyrics

Let’s dream it, we’ll dream if for free, free money,”

Shifting from the typical city mindset, Smith takes a trip to her hometown of New Jersey, recalling her younger sister’s birth and song title, “Kimberly.” This lively sixth track reflects the two sisters’ passionate souls and care for each other, where Smith continuously insists on the protection of her sister and a pure focus on her amidst chaos.

Another inspiration from her dreams transpires “Break It Up,” a song influenced by a dream Smith had about the late Jim Morrison. In her dream, Smith recalls Morrison being bound like Prometheus, to which she responded with a rapid chant of “break it up,” in an effort to help him free. Chaotic music and singing, it’s like Smith’s descending into madness, losing a fight for control. In lyrics

Smith’s own voice is breaking, losing its strength. Finally, in a loss of rhythmic singing, the rapid and desperate initial phrase and song title itself, “Break It Up,” is frantically sung, voice cracking and fading, screeching and whispering. This progression sounds like it leads to defeat.

Like “Birdland,” the second to last song, “Land,” is about nine minutes long, taking a similar tone of a slow progression, breaking point of crazy emotion and a slow, fading descent. The album title of “horses” is repeated throughout and the overlap of voices on top of each other and intertwining phrases, incites the shock of being exposed to something for the first time. Making sense due to the fact Smith attributes this song as a metaphor for the birth of rock n’ roll by singing the story of a boy “Johnny” referenced repeatedly.

From the breakthrough and birth of first exposure to rock for a young boy, which can perhaps be related to Smith’s own listeners of this album itself. For, Horses brings a side of poetry entwined with punk and rock that only Smith has managed to emulate in such a fashion. Horses concludes with track eight: “Elegie.” Released on Jimi Hendrixe’s death (September 18), this slow and concise ballad reaches many in the music realm and Smith’s personal life, lost.

This is evident through lyrics present in “Elegie” like,

“But I think it’s sad, it’s much too bad

That our friends can’t be with us today.”

While Horses is certainly an earlier album, both in Smith’s career and to new audiences today, the raw emotion conveyed throughout brings something newly ambitious to any listener. Smith’s work to be successful, more importantly, heard, is shouted, sung and screeched on this album through unique poetry, music and prose. Most remarkably, a theme of desire. One which I think many young artists who aspire to create can relate to.