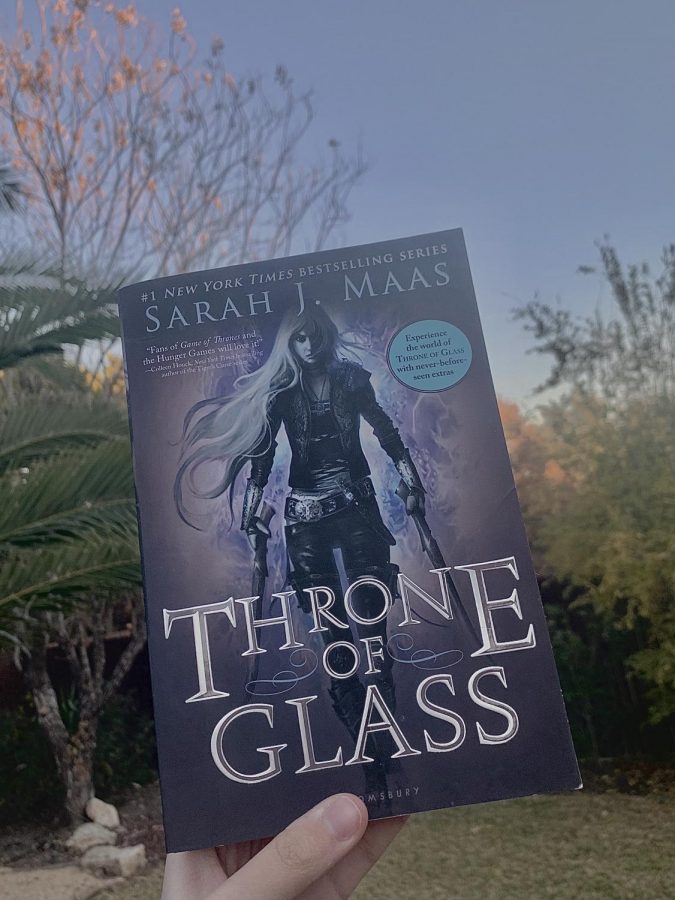 In 2013, the iconic “Throne of Glass” novel by Sarah J. Maas was exposed to the fantasy fiction community, leading Maas to quickly gain a popular standing among other world renowned authors like Veronica Roth (“Divergent” trilogy), and Marie Lu (“Legend” series). Maas has earned praise from multiple critics on her tremendous world-building skills and character depth in her books. She also began writing the series when she was 16, but it wasn’t picked up by Bloomsbury Publishing until 2012.

The first book introduces the diverse world of Erilea, a world of magic, darkness, humor and beauty. The creativity and intensity of eighteen-year-old assassin, Celaena Sardothien’s personality is immediately marked as relatable yet remarkable. Celaena is a slave in the Endovier salt mines after being captured by her many enemies. One fateful day the Crown Prince of Adarlan, the kingdom posed to dominate the continent, Dorian Havilliard and Captain Chaol Westfall come to her with a proposition. Celaena can compete to be the King of Adarlan’s “Champion” and in return for three years of service, her freedom will be granted. Throughout the course of the competition, Celaena grows close with Prince Dorian, Captain Westfall, and the rebel Princess from Eyllwe, Nehemia. When mysterious forces begin killing the other competitors, it’s up to Celaena to solve the mystery behind the killings, and the untamed power with which the King of Adarlan conquered the continent.

There were many skills the author cultivated in her writing, one of the best being the world-building skills, let’s chat about those. The vast and realistic world Maas created continues to blow my mind even after finishing the series. Additionally, it’s not plagued by too much description, unlike the famous “Lord of the Rings” trilogy by J.R.R. Tolkien, which can haunt the mind to this day. It leaves just enough to the imagination, but also adds the scenic spice that makes each environment magical in it’s own way. The author provides helpful details like maps with locations of the many different cities and kingdoms, which proved to be very helpful throughout the novel. The expanse of this world continues in the following books with new maps. The way Maas incorporates the seasons, as well as general climate and geography, gives each location a completely different setting, emphasizing Maas’ incredible world-building skills.

When it comes to strong lead characters in fantasy fiction books and movies, it’s pretty easy to say that most of them have been male up to a point. Luke Skywalker, Harry Potter and Percy Jackson for example, all portray the heroic male protagonist. While, yes many of them have female counterparts, it’s easy to see that they are not the main characters judging by screen time, plot conflicts, and even title of the story. It’s typical to see the women play the damsel sometimes even in their own stories, but not with Celaena.

From the first page, Maas expresses Celaena’s skill in combat and weaponry, but also shows her mental strength because Celaena managed to survive a year of slavery, even though most people died soon after admittance to the mines. It was exciting to read how she trains herself, and how she works hard to get to be an experienced assassin. This is very interesting to see as a continuous pattern in the novel. When she is weak; she builds her strength back up through harsh training and physical combat. When more about her past is revealed, it’s a marvel that she is still alive and fighting for the people she cares about.

The female empowerment alone is incredibly moving in this novel and Celaena’s drive behind not just surviving, but living will leave readers astounded. Although Celaena repeatedly confronts her challenges impassively, she displays her capacities of being vulnerable and afraid, and how that doubt creates further moral conflict for her.

“Throne of Glass” provides an escape from the real world. The captivating storyline, breathtaking landscapes, and emotional depth of the characters make this a worthwhile read.