Welcome to the city that never sleeps

A column about the adventures I had in New York City. 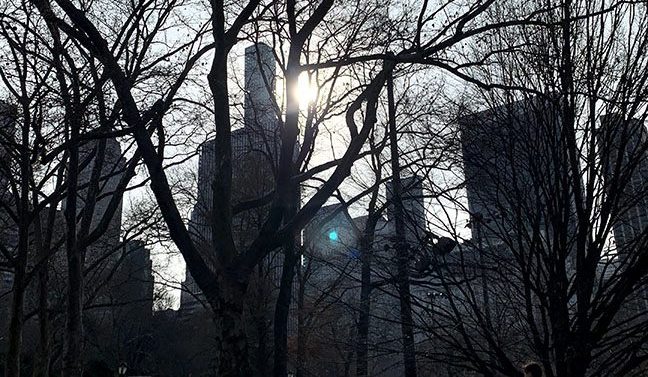 A view of high-rise Manhattan from behind the trees of Central Park.

The wind whips through the skyscrapers as blaring artificial lights erase the stars. It’s a brisk night in New York City, yet people still bustle by. Wrapped in coats, scarves and hats, the business men and women streamline the sea of tourists while the taxis honk like white noise. Although the sky is vacant of stars, the streets are littered with trash and the cars never stop honking, the city remains stunning. A city that never sleeps. A city that consumes you and spits you out into organized chaos. A city that remains magnificent in the gleam of bright light from apartments covered in scaffolding.

New York City is alien compared to Austin. Skyscrapers line every block and stop the sun from reaching the side streets. It’s astounding to experience the engineering that overcrowds the city. From stone to steel,modern to historical, the architecture defines neighborhoods of Manhattan such as Hell’s Kitchen, Times Square and the Financial District. This dynamic of design differs drastically from the open streets of Austin. Where New York is crowded with buildings on top of buildings, Austin is spread between miles of road, occasional skyscrapers and usually uncluttered streets. It was intriguing to see a true metropolitan littered with pop culture, money and dirt.

My favorite experiences of NYC lie in the Broadway theatre, the 9/11 museum and Central Park as well as the sight-seeing of the city as a whole. One brisk, early morning, my family and I went to see the “Today Show” at Rockefeller Center. Although it was incredibly cold, it was so exciting to see the journalists film in real time. After, we traveled down to the east side of Lower Manhattan to see the 9/11 memorial museum. The museum was heart-breaking, angering, beautiful and shocking. Throughout the museum there were remnants of the twin towers with details about where each structural piece originally sat and how it was destroyed. An enclosed space in the middle of the museum allows visitors to see quotes, broadcasts from news stations and the second plane crash as well as clothing, burned paper and voice recordings.. Before the memorial, I knew very little about 9/11 ー just the basics ー but after the memorial, I couldn’t hold my tears back. It was humbling, sickening and terribly depressing, but it was my favorite part of the trip. It was such a human experience. I will never forget the innocent civilians and heroic first responders who died that day. On the last night of my trip, we went to see “Mean Girls the Musical” on Broadway. At first, I was hesitant to see the musical because  of my love for “Hadestown” and “Beetlejuice”, but I was surprised at how incredible the show was. It was humorous, daring and lighthearted. . I adored the cast and immediately fell in love with the musical numbers.

It was a chilly, unforgettable December trip. I’m so grateful for my family, my opportunities and the experiences I am now able to remember for a lifetime. Manhattan is a beautiful, alien city I may just be in love with.