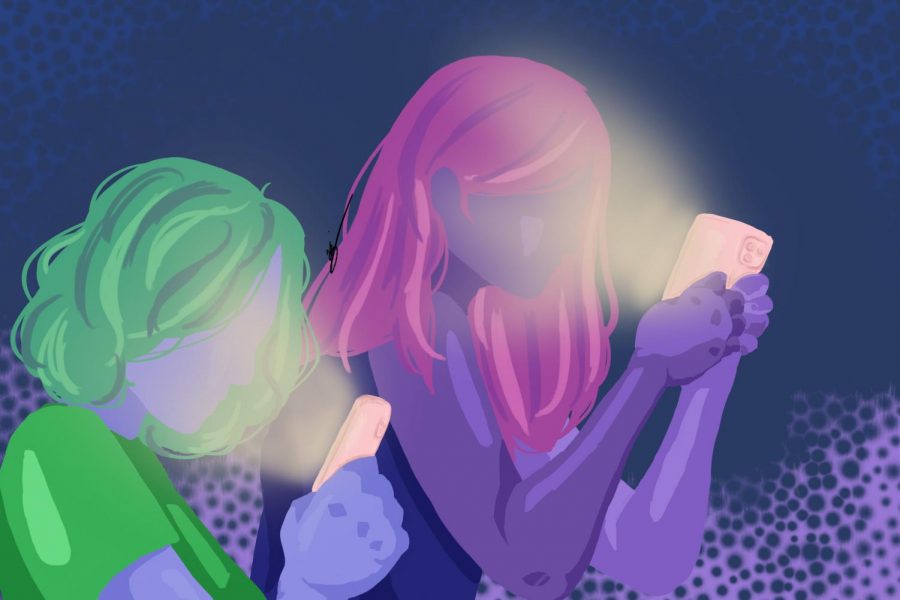 The unauthorized usage of cellphones in classrooms has risen in recent months.

Vandegrift faculty have recently noticed a rise in distracted students during class time.

One thing that staff said has disrupted classroom activities is the unauthorized usage of cellphones. Students are on them either during classroom instruction, or when they are supposed to be working on assignments.

“Many students are on their phones during notes and instruction,” math teacher Jenni Darlow said. “Texting, playing games, listening to music [and] just playing on the internet.”

Darlow believes that the rise in unauthorized cell phone usage can be attributed to more than a year of digital schooling, where students could have all of their entertainment at their fingertips during instruction.

“Students could constantly be on their phone, or doing other things on the internet during class last year,” Darlow said. “Last year some students spent a lot of class time gaming instead of being engaged in class.”

In response to unauthorized cell phone usage, many teachers are beginning to take measures to limit the impact cell phone use can have on the classroom. These tactics vary from teacher to teacher, from having students simply keep them in their backpack, to all phones being left under the teacher’s supervision at the start of class.

Starting the 3rd six weeks, I have students put their phones in a holder at the front of the room during instruction and during tests/quizzes,” Darlow said. “Notes are going more efficiently and students are focusing better.”

Many students, not wishing to be in trouble, have complied with these new teacher rules regarding cell phone usage.

“You can get your phones back for the rest of the class whenever the lecture is over,” senior Ryan Brito said. “To me this is the most effective as students have been forced to concentrate and focus, resulting in the class that didn’t really like the subject to at least be somewhat knowledgeable in class.”

Other students believe that the use of phones can actually help in the classroom.

“I think cell phone usage is necessary for class,” senior Rolando Garza said. “I personally think that cell phones help students and others have the tools needed like calculators and google to be at the top of their class.”

However, some students and teachers have said that many of these teacher policies are very unorganized in nature and vary widely from classroom to classroom. Some teachers wish for a more uniform policy on classroom cell phone usage.

“I think it would be easier on teachers if there was a campus-wide policy regarding phones,” Darlow said. “Teachers could focus on the many other things they need to do during class, rather than policing phone usage.”

There is a balance between students who waste their class time on their phones and students who keep them put up and are paying attention.

“Personally, I only use it whenever I know I have down-time to do whatever,” Brito said. “Mainly for entertainment purposes, looking at social media: Youtube, Instagram, Snapchat, et cetera.”

The issue of cell phones in classrooms remains a contentious issue between students and faculty, with students believing that cell phones, as long as they are left in bags, aren’t a problem.

“I wouldn’t say that it necessarily enhances the learning experience,” Brito said. “But it doesn’t really hurt it at the same time.”