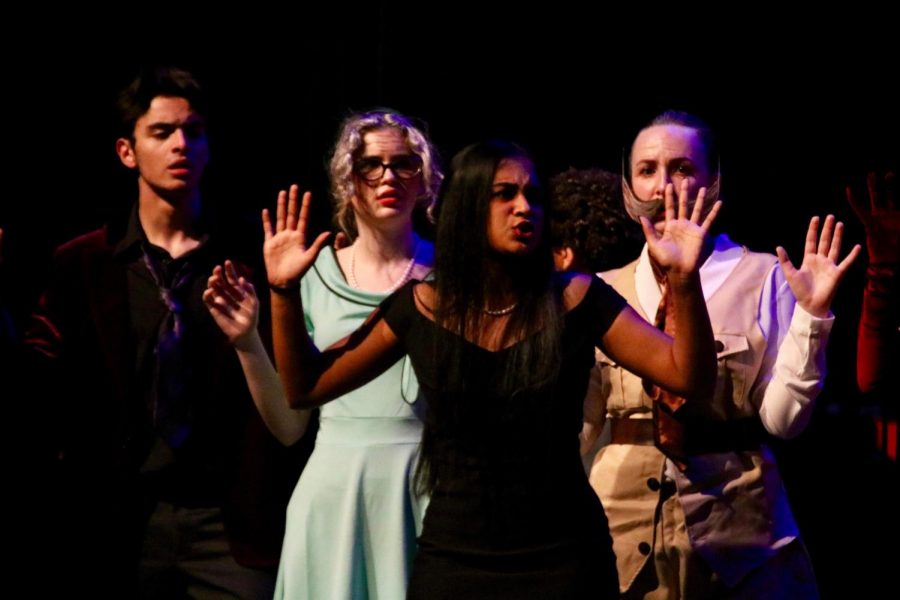 The house lights dim as the actors backstage adjust their wigs and costumes, and the curtains open. They have been preparing this for weeks and finally, it’s time to have the audience figure out who the culprit is in this classic murder mystery.

Vandegrift Theatre Company is debuting “Clue” tomorrow night as this year’s spring show. The show is based on the classic board game and adapted from the murder-mystery movie starring many iconic characters such as Colonel Mustard, Professor Plum and Miss Peacock.

“I love clue and it’s one of my favorite movies,” senior Alex Fletcher said. “I just love the characters and I love the story, so whenever I found out that there was a play, I first asked if it was like the movie because it’s so like theatrical that it could be turned into a play.”

Fletcher believes that this show is different from previous productions because there are very stereotypical characters. She classifies Mrs. Peacock as a godly woman, Mr. Green who is a vibrant and loud gay man and Scarlet and Professor Plum both as very flirtatious characters.

“You can see all of these different types of characters throughout the show interacting, and Wadsworth kind of like brings them all in,” Fletcher said. “I just think that [the character persona] is one of the funniest parts about [the show].”

Director Jon Alonso considers the most unique element of the show to be the amount of new students involved in the show, some of which have never performed before.

“I’ve got one freshman boy that’s never done theatre before,” Alonso said. “It’s his first time [in a show] and a lot of the people participating are ones that weren’t able to do the musical and are not involved in One Act Play, so there’s a lot of fresh new faces and fresh talent being seen.”

One thing that Alonso and Fletcher both mentioned the show is special because of the humor. Alonso said that some of the jokes are more tailored to an adult audience and that some students haven’t caught on to the humor, but he believes that the large audience will have positive reactions.

“[I’ve watched] the students build characters, voices and little characterization things that I never would have thought they would do,” Alonso said. “It’s turned out to be really funny. I’m excited about the opening night specifically because, once you get it started, all of the students stress and hard work pays off.”

Stage manager Jeyashri Rameshbabu is particularly excited about the end of the play. She said that her favorite line in the entire show is the last one and that she can’t wait to see how the audience reacts.

“There’s also this one part where the cat dies and we throw stuff on stage,” Rameshbabu said. “One of the characters ends up kicking the cat off into the audience and it’s a lot of fun. [I’d tell people that] before you come to the show, wear your laughing pants. Just be ready to laugh the entire time and have fun.”

Alonso leaves similar words of advice, saying that the audience should come ready to laugh and relax. It’s definitely not a normal comedic show, but rather fast-paced and modern.