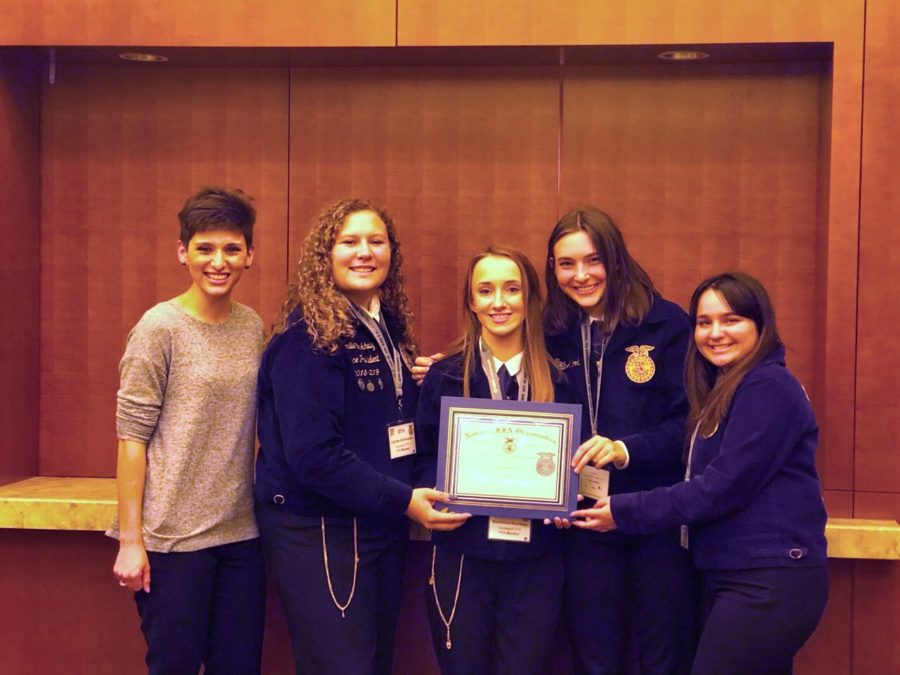 Their hearts pump rapidly during the task set before them. Test after test, for two rigorous days, they compete. Although they’ve been preparing for months, the seeds of anxiety seem to have rooted themselves into the pits of their stomachs.

The floriculture team competed at Nationals in Indianapolis Oct. 30 and 31 – after winning state against 1,400 other Texas teams – and placed 20th against competitors from all over the country. The team, led by FFA teacher Magan Escamilla, consisted of four girls, three of which are away at college after having graduated – senior Madeleine Rawlings, Camille Barkhuizen, Tori Botello and Noel Attwood.

Although they are a team, each of the members work by themselves through the competition and there’s no contact with each other other than team activities. Due to the abundant coalition of tests, the contest was split into two days. Day one tested the girls over general information over floriculture, problem solving and a team activity of making a wedding order while being timed. Day two, the girls had to explain to judges how to solve hazardous situations, create an advertisement video as well as creating various floral arrangements.

“Texas FFA runs their competition very differently than the National Competition. In fact almost nothing about them are the same,” Rawlings said. “My biggest expectation was that the competition was going to be very difficult.  However, my expectation of the level of difficulty worked in my favor because I was able to practice knowing how challenging the competition would be.”

To prepare, the team members utilized resources released by The National FFA Organization so they could be prepared to perform exactly what was expected from them by the judges at Nationals.

“As a team we practiced during the summer together. We practiced making bows and how to identify plants and materials on the identification list,” Rawlings said. “However, [since] three girls on the team graduated earlier in the year, I am the last one in high school. Although this did create a conflict in one on one preparation with one another, we were still able to practice through filling out documents on our computers together as well as sending each other resources.”

Incredibly, the team configured their strategy to adapt to their distance. Despite the giant disadvantage they had in comparison to other teams, it didn’t discourage the girls from trying and preparing.

“I had no doubt in my mind that the girls on the team were working hard, however, being in college created very busy schedules for them which was something to keep in mind because they weren’t always able to study for the amount of time I could,” Rawlings said. “The team was dedicated and had a passion for the competition so I knew they were doing what they could to prepare even if I wasn’t able to talk to them on a daily basis.”

The girls’ individual hard work and dedication paid off as the team ranked 20th nationally.

“Placing 20th in the country was not only an amazing feeling but it was also a sense of relief because we honestly were not sure how we were going to place due to the fact that as a team we were not able to practice together but instead had to practice individually,” Rawlings said. “Everyone on the team was a silver medalist and we all showed a sense of pride not only in ourselves but as well as in each other.”

Escamilla, who has been at Vandegrift for six years, undertook the circumstances with grace and coached her floriculture team with pride and merit.

“I am so proud of these girls and their dedication to the Vandegrift FFA and their team. For them to come back from college and spend one more week with their high school team and advisor meant the world to me,” Escamilla said. “I hope to go to nationals again with a team some day. It is an incredible honor to be able to represent Texas in a national capacity.”