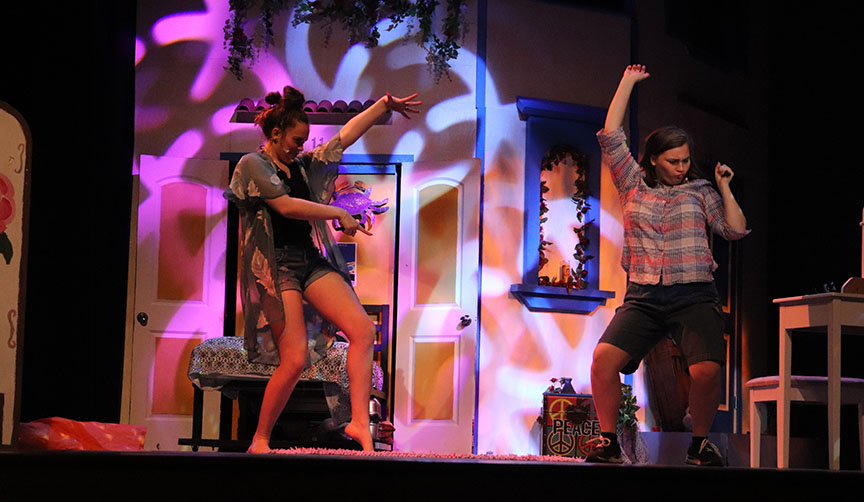 Sophomore Rain Collier and junior Julia Jones dance in a number as their characters recall their Donna and the Dynamos days.

The lights dim as the live orchestra’s music fills the auditorium. A spotlight lights up the left corner of the stage where Sophie sits, singing in the moonlight and sending off her letters.

“Mamma Mia!,” Vandegrift Theatre Comapny’s first production of the school year, premiers tonight at 7 p.m. in the PAC. Tickets can be purchased online. The musical will have five total shows, including a sing-along Sunday.

“Mamma Mia!” is a double cast production and the actors have taken to referencing the different casts as “The Sophomore” and “The Senior” casts. Sophomore Kate Denning portrays Sophie’s mother Donna in the sophomore cast and expresses how dynamic her character is.

“In the first act she’s a very fun loving person and then the dads show up and she has to deal with this new problem now and so then she goes into this hard working mindset and by the end of the show she’s come full circle, accepting that everything will be okay,” Denning said. “I love dynamic characters like Donna because I love being able to play different perspectives within one show.”

This is the first time the theatre program has done a sing along, which The “Senior” cast will perform Sunday night. Director Celeste Schneider said the idea actually came from Vista Ridge’s performance of “Mamma Mia!” last year.

“I decided let’s add a fifth show and see how it goes and it’s such popular music that we have a lot of people coming just because they want to sing along and have fun,” Schneider said.

For auditions, Schneider had students send in videos before school started because rehearsals began the first day of school. After, callbacks took place, which included another round of live auditions consisting of dancing, singing and cold reads.

“You have to pick a show you think you have kids for in general, but I never walk into an audition thinking about who’s going to play who because that kind of limits you as a director,” Schneider said. “I try to walk in with an open mind and no preset ideas.”

Comically, one of three possible fathers, Sam, is played by senior Sam Smoot, whose background lies in choral music. Smoot praises the choice of the musical for it’s music and claims the name matching really was unintentional.

“Sam was the role that fit my vocal range best,” Smoot said. “The best thing to do is to really put yourself into what your character’s feeling or what they’re going through in each scene and just practice doing it over and over again, your character starts to really develop.”

Junior Gavin Vanna, who plays the role of Sky, was surprised after he was cast when the rest of the theater program informed him that he’s “such a Sky.”

“It’s a role I’ve done a lot of analysis on,” Vanna said. “I’ve been really trying to get into the role and understand this character’s motives – I want to add a little more depth to a role that might just seem like a love interest.”

Vanna also enjoys developing his character by breaking him down and adding a personal anecdote to the role. He didn’t want Sky’s story to reflect the movie’s image of him, but instead Vanna’s own rendition of him.

“I wanted to give my own personal spin on it and break him down in a way I saw fit,” Vanna said. “I feel lucky because the show is just full of extremely talented singers, phenomenal actors, and our ensemble works extremely hard, as well as our tech who just make the show what it is. The set and the lighting, everything, is really just immaculate.”

Learning to understand her character is also important to senior Kylie Diefenthaler, who plays the role of Sophie. She uses a different read through approach in order to develop her Sophie and help memorize her lines by going through her script and asking herself why her character says a specific line and why it is important.

“I go through each scene as a whole and ask what’s my objective throughout the scene and then what my super objective is, like Sophie’s is to find her dad,” Diefenthaler said. “I try to go through it as realistically as possible and act as if I was Sophie and ask myself what I would do in her shoes and think about how I relate to Sophie’s underlying emotions.”

Intense six to eight hour rehearsals have been a huge factor in helping the cast members bond over long nights and intense dance rehearsals.

“My favorite part is being with the community,” Smoot said. “We’ve all grown really close to each other, especially since we spend so much time together for rehearsals.”