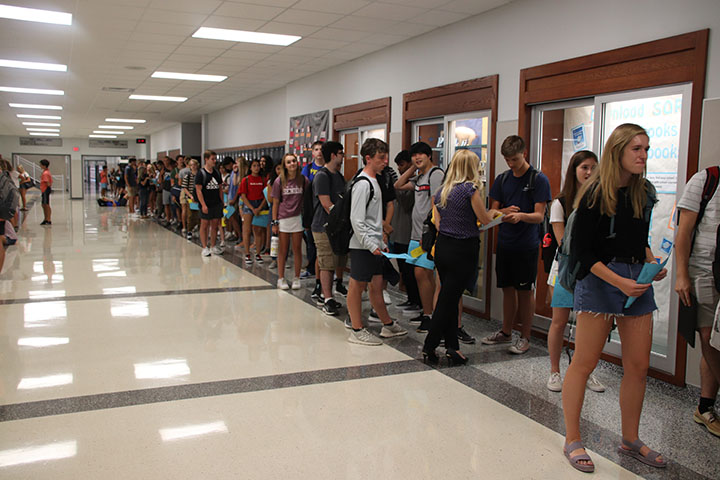 Students had to wait in this line to get their schedules changed.

During the summer, Leander ISD transitioned to a new computer system called eSchoolPLUS to record attendance and grades. According to Community Impact Newspaper, district officials held a meeting last fall to discuss the replacement of the old system called Computer Cooperative Software. The reason for the change was LISD wanted a more modern software that could adapt with the growing number of students and that had improved functionality for all users.

Some of the new features the system is set to include are mobile applications, a new interface as well as reporting abilities. However, the system had a massive problem that had crippling effects for the first few days of school.

According to an email sent out by VHS Insider, several schedule changes submitted before Aug. 1 were lost when the system was changed. The effect of this was on the first day of school, many students returned from summer vacation to find that their schedules were incorrect. For example, some students were missing classes in a certain period. As a result of this technical error, a large number of students needed corrections to their schedule. Not helping the issue was the fact that the eSchoolPLUS system was running incredibly slow for the first couple days of school.

“The system failures has affected me in that I haven’t been able to set up my gradebook and categories,” math teacher Lynn Odonnell said.

According to VHS Insider, the issues with the system will soon be over. Many students have already had their schedules fixed and the few who don’t will have them addressed very soon. In addition, the eSchoolPLUS system is said to be working much better than it was since the first few days of school.

Parents have also been hard at work assisting the school faculty in controlling the problem. From donating food and coffee to school faculty to volunteers actually helping out with long lines of anxious students, they have provided valuable support to the school’s administration. In addition, the school faculty has also thanked the thousands of students at Vandegrift for their patience with this issue.

“I am so proud of all of our students, teachers and staff for staying positive and pulling together to make the best of this unusual start to the school year,” counselor Jennifer Fischer said. “With the last few problems of the system being mopped up, VHS hopes to move past this issue and have a great issue-free school year.”