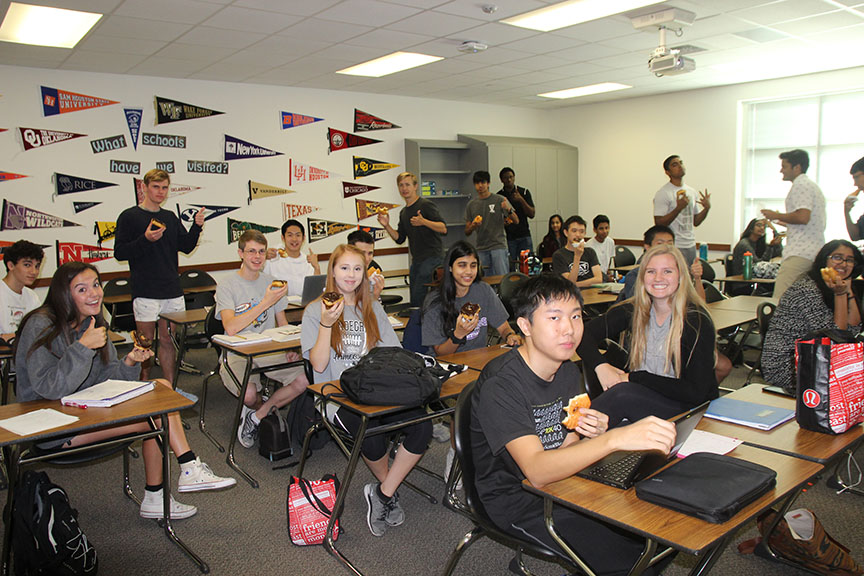 Today concludes Red Ribbon Week. Pre-Calculus teacher Dana Raitt’s class received a doughnut party during second period today. Student council set up a drawing on Wednesday during second period. Teachers took a tally of the number of students wearing red, the classes that had the highest percentage of students wearing red were put into the drawing. The purpose of this event is to promote the importance of living a drug free lifestyle for students. Students wear red to show their admiration and support of living a drug free lifestyle.

To acknowledge red ribbon week, student council hung up red bows throughout the school on the stairs and outside. They also purchased the donuts using their funds.

“Everyone got a donut,” senior Joey Hatch said. “Most people choose glazed but I got chocolate because it’s my favorite.”

Drug use is fairly common among adolescents. According to the national Institute of Drug Abuse, 70 percent of high school students will have tried alcohol, 40 percent will have smoked a cigarette, and 20 percent will have used a prescription drug for a non- medical purpose before they graduate. Students can be affected academically by drug use even if the substance hasn’t become addictive.

“I have a friend who lost his athletic scholarship after he was drug tested and failed,” said Akkihal. “He was kicked off the team and lost his chance for a full ride into college.”

“I had a good friend freshman year at my highschool, he was really cool and he didn’t use drugs and then he started hanging out with people that did abuse substances,” Hatch said. “The following year he dropped out of high school and has been off the map for like two years now. His family hasn’t heard from him and neither have any of his friends. I think that it is important for students to know that they don’t have to do drugs to have friends.”