Model UN Starts Off Their 2018 Year

Model United Nations had their first meeting of the year last Monday, introducing the club to newcomers as well as beginning to prepare for the upcoming years conventions. The members of the club try to model the United Nations by simulating the topics they discuss with each person representing a separate country. In their first meeting, the club began by explaining what Model UN was all about and how it was run, they then started a mock conference, debating over topics each member had an opinion on in preparation for their future conventions.

“The club is really fun because it’s great to get to talk to people who are also interested in politics, and also helps you learn a lot about the world,” Secretary Jackson Broadhead said. “Not only do you hear about the US, but other countries and what their people and government think about a topic.”

Every year Model UN takes the information they learned about their given country to a convention, the biggest one being at UT Austin, to talk about simulation world conflicts.

“Our first convention is called ‘Central Texas Model United Nations’,” Broadhead said. “It’s a 3 day conference on Nov. 9-11th, there is about 100 kids in each committee, which is about 100 people in the room representing a different country, that’s close to the size of the real UN.”

This conference is the largest in which Vandegrift Model UN attends. Roughly 10-15 delegated from Vandy are expected to go this year, accompanied by people from Texas, neighboring states and Mexico.

“It is a really big conference, but we hope to get a lot of people going,” Vice President Natalee Che said. “Model UN has actually always been a pretty small club, so this is the first year we are trying to expand it.”

Everyone will be working together over the course of three days to come up with solutions to different topics, speaking from their countries perspectives. After delegates are assigned a country for the convention, they will receive a background guide so they know what to base their research on.

“The guide basically tells you what is going on in the crisis, but you have to do lots of research for reliable articles you can site based centered around your country,” Che said. “The first one I was assigned was Mexico for the social cultural humanitarian committee, the topic was about Internet surveillance so I had to look up Mexico’s view on internet surveillance for the conference at UT Austin.” 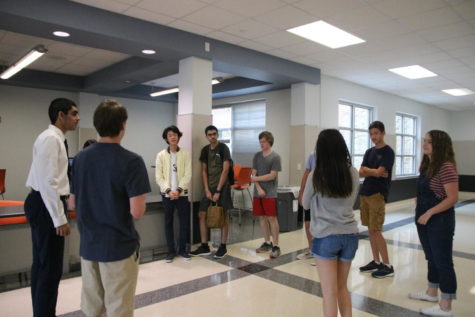 Many students get involved in Model UN to be able to discuss worldly issues in which can be talked about in an educational manner, discussed by student diplomats.

“I moved from California last year so I wanted to get involved in some clubs that were academic,” Che said. “I jumped right into Model UN and was a little nervous, but I tried to bring my friends in and definitely though it was really cool.”