The Blue Blazer- A DECA Story 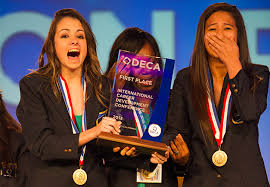 DECA is a national academic program offered here at Vandegrift. There are roughly 200,000 students that compete in DECA nationwide. This past week I sat down with third year DECA head, Erin Mathis and role play competitor Cecilia Reis. Together they helped shed light on what the program is, and what it has to offer students.

“It is an organization that lets students explore and compete in different aspects of business, everything from finance, to business, to entrepreneurship. It gives them the opportunity to get first hand knowledge on how businesses operate,” Mathis said.

Members of the DECA program found that it was some what intimidating, but changed the way that they carried themselves and interacted with other people in a business professional way. Students such as Cecilia Reis experienced this when competing for the past two years in the DECA role play competition.

“I love that DECA has taught me real world skills that I can use in my future job and academically, it has taught me how to act in mature and professional settings. Especially when we do competitions, and have to dress in work attire and interact with the judges as if we were actually talking to a business associate,” said Reis.

The DECA program is also a great way to make friends that have similar interests and strengths as you because it is so versatile. The program offers two main events which are written and role play, but there are numerous categories to compete under such as fashion design, sports medicine, and various others.

“The role play competition is a three part competition. The first part is a test that you take a few weeks before the actual competition on a cluster of information some relating to and some not to your category of choice. This part accounts for 40% of your final score,” said Reis. “ The second part is a case study of your subject of interest under one of the categories. For the third part you then have a presentation that lasts about 15 min presenting to a judge that has worked in that field.”